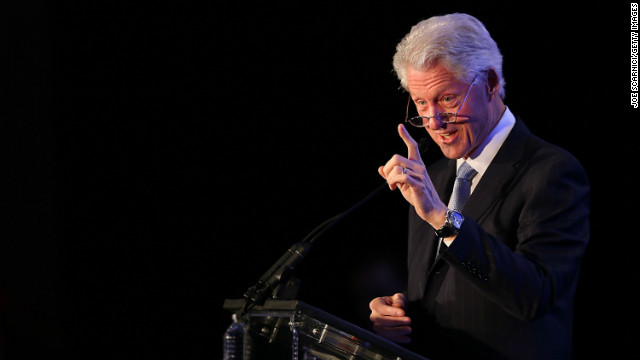 CNN’s POLITICAL GUT CHECK | for February 8, 2013 | 5 p.m.
— n. a pause to assess the state, progress or condition of the political news cycle

MAKE WAY FOR RAND PAUL ... THE TEA PARTY SAVIOR?... Tea party leaders are turning to Sen. Rand Paul, R-Kentucky, to deliver their message following President Barack Obama's State of the Union address, a speech that will compete with the official Republican response. Paul will make his remarks soon after Sen. Marco Rubio, R-Florida, wraps up the GOP response Tuesday night, a Paul spokeswoman confirms to CNN. "We are giving a voice to the tea party movement when the mainstream media and the Republican establishment wants to write us off as dead," said Amy Kremer, chairman of the Tea Party Express. This is the third year in a row that Kremer's organization has sponsored the tea party response. The back-to-back addresses Tuesday night also features two young stars in the GOP, each of whom are expected to seriously consider running for the White House in 2016. – Mark Preston

Gut Check DVR: Sunday at 9 a.m. & Noon ET Sen. Rand Paul, R-Kentucky, will be an exclusive guest Sunday on State of the Union with Candy Crowley

DEVELOPING … CLINTON OFFERS DEMOCRATS “MARRIAGE” ADVICE: FORMER PRESIDENT CLINTON AT THE HOUSE DEMOCRATIC RETREAT: “One of the things that really disturbed me when I was here serving that I saw carried forward and really manifested in 2010 in some of the elections is we have had too many people who consult with us and tell us how to do things, do polls and say well here are these five things you did and four of them are really popular and this one thing is really, it’s a hot issue, so talk about one through four. And now just think about that. Would there be a successful marriage that took that position? Would there be a successful business enterprise or a sports team or any other kind of relationship that depends upon trust if you took that position? In my native state of Arkansas we call that walking into somebody’s living room and seeing a huge pink elephant. If you do that, you don’t get very far telling them how the sofa is. You cannot – that is wrong. If you’re going to stir up a storm over health care, over immigration, over what I hope you will take up, making easier access to the polls a national priority, if you’re going to do these things, you have to turn into them not away from them. You cannot assume that people – you look at (them) and say, oh, that’s not my demographic, we have nothing to say to them, they have nothing to say to us.”

CLINTON ALSO WARNS HOUSE ABOUT NEW GOP ... "We should assume going forward that the people who disagree with us honestly in our approach will not make it quite as easy to draw the contrasts by the things they do and say as they did the last time. Matter of fact, that's kind of the message I got out of the House Republican meeting, you know. It's like, ‘We're gonna put on a happy face and be for immigration reform.’ … This strategy of theirs is not necessarily guaranteed to fail."

Incumbent President Richard Nixon painted the country red in the 1972 presidential election, winning an astounding 520 out of 537 electoral votes and defeating Democratic nominee George McGovern by more than 18 million votes, the widest margin in presidential history.

This week we are looking at the 1972 Republican primary: What if the popular House Minority Leader Gerald Ford had challenged the sitting president? Would he have been able to make Nixon a one-term president and secure the Republican nomination for himself?

Opinions were divided – far from the Nixon ’72 blowout.

Corby Brester: Nixon still would have won the nomination. No Republican at that time had the credentials he did.

Joseph Jones: Ford all the way!

Disagree? Email us at gutcheck@cnn.com.

Leading CNNPolitics: Gun focus shifts from ban to checks and trafficking
Eight weeks after the massacre of 20 Connecticut first-graders, a ban on the kind of semi-automatic rifle used by the killer remains elusive - if not impossible. – Tom Cohen

Leading Drudge: Blizzard Now
Two storms are merging to bring a major blizzard to New England with the worst conditions Friday night into Saturday. There are already airline and rail delays. Roads may become impassable in many areas. – Alex Sosnowski

Leading HuffPo: Trivial Pursuit: Rove Vows to Keep ‘Making Fun’ of Judd
GOP strategist Karl Rove explained Thursday that his American Crossroads super PAC was intent on launching a sustained attack on actress and potential Kentucky Senate candidate Ashley Judd in hopes of putting her on defense before she even enters the race. – Nick Wing

Leading Politico: Christie struggles with politics of his weight
After years of questions about his girth, Chris Christie seemed to settle on a strategy — leave them laughing. – Maggie Haberman

Leading The New York Times: For Democrats in G.O.P.-Led House, a New Congress Means Some New Muscle
After more than two trying years in the political wilderness, House Democrats who gathered here for their annual retreat are starting to appreciate a new political reality that few of them expected: They matter. – Jeremy Peters

How many Cabinet secretary nominees have been rejected by the U.S. Senate?

- “Why Understanding the Gun Control Debate Means Understanding Demographics” -
COOK POLITICAL REPORT NATIONAL EDITOR AMY WALTER WRITES: “In 1994, the assault weapons ban passed the House 235-195, with 46 Republicans joining 188 Democrats in supporting it. That a bill limiting gun ownership would pass Congress with 46 Republicans is impossible to imagine happening today. … As important is the decimation of the ranks of the moderate Democrat. … In short, there was a political “coalition of the willing”–members who were willing to put policy before party–that existed back in the 1990s that no longer exists. Today, 96% of Democrats sit in districts carried by Obama, while 94% of Republicans are in districts carried by Mitt Romney. There is zero incentive for a Republican incumbent to work with a Democrat and vice-versa. Moreover, members who vote against their party can now expect ‘retribution’ in the form of a primary challenge. That kind of enforcement of party purity did not exist in 1994.” (LINK: http://cookpolitical.com/story/5323)

GUT CHECK FULL SERVICE: Vice President Joe Biden rallied House Democrats at their retreat this week: “We spent an awful lot of time in the passage of the 1994 crime bill. … It was tough. It was really tough. We lost the Congress immediately after that. Some attributed it to the difficult stance people had to take particularly on the assault weapons ban. People have walked away learning the wrong lesson from that, saying, you know what, it’s demonstrable that it’s too risky to take on some of this stuff because look what happened last time we did this. That’s the reason in part why it didn’t get reauthorized in 2004 in the Bush administration. Well I’m here to tell you the world has changed. The world has changed since 1994. Public attitudes have changed since 1994. Social media has changed. The ability to misrepresent our positions has changed … I’m not asking you to vote for something you don’t believe. But I don’t want to hear about, well, we can’t take it on because it’s too politically dangerous.”

- Kerry: ‘Iran has a choice’–
SECRETARY OF STATE JOHN KERRY SPEAKS ON IRAN’S SUSPECTED NUCLEAR PROGRAM: “Iran has a choice. They have to prove to the world that it is peaceful and we are prepared to sit reasonably and negotiate how they can do that and how we can all be satisfied with respect to the United Nations requirements in the effort to do that. Or they can choose to be more isolated, as I said earlier. It's really their choice, not ours, as to which way they want to go and the administration, the president has made it clear that his preference is to have a diplomatic solution. But if he can not get there, he is prepared to do whatever is necessary to make certain that Iran does not have a nuclear weapon.”

- Panetta says his dog is not the administration’s leaker -
OUTGOING DEFENSE SECRETARY LEON PANETTA MENTIONS HIS DOG AT A FAREWELL CEREMONY: “I am grateful that Bravo is here today. Bravo was in all of the meetings when we planned the bin Laden operation and he also sat in on many of the sensitive meetings and discussions that I had at the Pentagon. I want you to know that he has never told a soul what he heard. He is definitely not a leaker – at least according to that definition of the word. You’ve heard of the movie Zero Dark Thirty. The producer is seriously considering a new movie about Bravo entitled Zero Bark Thirty.”

- Their chairs might as well be empty? -
IN AN INTERVIEW WITH CNBC, CLINT EASTWOOD SAYS WASHINGTON LAWMAKERS AREN’T PERFORMING: “There’s just a lot of people standing looking at one another and maybe it just appears that way to us who are outside of the beltway. Right now it’s very disappointing. I just wish - the election’s over, we should be moving ahead. And the leaders aren’t stepping up. … It’s almost like they don’t give a damn. So if they don’t give a damn, why do they expect anybody else to?”

Pelosi told Colbert: "Governor Nikki Haley rejected you; we will welcome you with open arms."

Colbert to House Dems: "Republicans' loss in November has them soul searching...whether or not they have souls."

But aren't I always gentle and understanding? "John McCain: The grand inquisitor" http://t.co/3f9fRMob

A list of presidential hobbies. (That Zachary Taylor sounds like a fun guy.) Add painting to GWB's. http://t.co/Cu3JEdQy

Nine people have been nominated by the president to a Cabinet position and then rejected by a vote in the Senate, according to the legislative body’s historian.

The first occurred on June 23, 1834, when President Andrew Jackson used a recess appointment to nominate Roger B. Taney to lead the Treasury Department. Just a day after his nomination, the Senate reconvened and rejected him by a vote of 18-28. Technically, Taney, who would go on to become chief justice of the United States, served one day as Treasury secretary.

Most of these rejections had little to do with the nominees. Instead, the Senate was protesting Tyler becoming president after President William Henry Harrison died. At the time, Tyler was openly warring with his own Whig party and the Senate was punishing the president by rejecting his Cabinet nominees.

Presidents Andrew Johnson, Calvin Coolidge and Dwight Eisenhower all had one nominee rejected, too.

The most recent rejection came in 1989, when President George H.W. Bush’s nominee for secretary of Defense – John G. Tower – was rejected by a 47-53 vote.

Tower was rejected, primarily, because he was accused of being a womanizer and a drunk. After being rejected, he told The New York Times, “Have I ever drunk to excess? Yes. Am I alcohol-dependent? No. Have I always been a good boy? Of course not. But I've never done anything disqualifying. That's the point.”

On Thursday, Senate Armed Services Committee Chairman Carl Levin, D-Michigan, made it clear that he is fed up with Republicans dragging their feet on Chuck Hagel’s nomination for Defense secretary, and says he will schedule a vote soon, even over Republican opposition. Some Democrats and Republicans had been concerned that Hagel’s nomination would be stalled in committee or filibustered in the Senate.

Congratulations to Steve Liguori (@SteveL3877) for his correct and concise answer.

Anyone can sign up for Gut Check by e-mailing gutcheck@cnn.com.