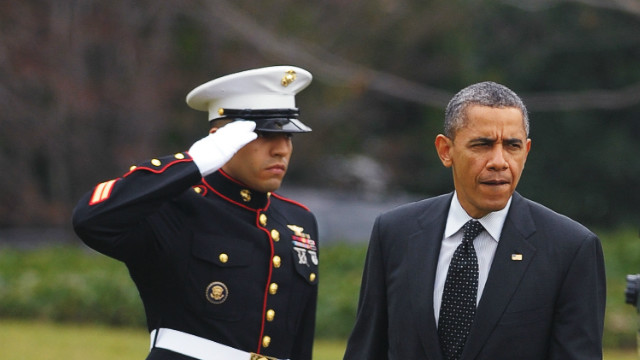 Washington (CNN) - As President Barack Obama gets ready to give the first State of the Union address of his second term, it appears his poll numbers are a bit lower than they were just last month.

According to a CNN Poll of Polls, which averages the latest surveys, 49% of Americans say they approve of the job the president's doing in office, with 44% saying they disapprove of his performance in the White House.

That's down just a bit from a 52%-43% job approval rating in a CNN Poll of Polls from mid January, just before Obama's second inauguration.

The new CNN Poll of Polls, compiled and released Friday, averages the three non-partisan, live operator national surveys conducted in the past week and a half: Gallup's daily tracking poll (Feb 5-7), Fox News (Feb. 4-6), and Quinnipiac University (Jan. 30-Feb. 4). Since the CNN Poll of Polls is an average of multiple surveys, it does not have a sampling error.

"Historically speaking, it's not a surprise for a second-term president to lose a couple of points in the aftermath of his second inauguration," says CNN Polling Director Keating Holland.

"It looks like the approval ratings for Bill Clinton in 1997 and Ronald Reagan in 1985 dropped two to four points after the celebratory coverage surrounding their inaugurations faded. It's possible that second-term presidents have honeymoons just like first-term presidents, except that in the second term the honeymoon can be measured in days or weeks, not months," adds Holland.

But the president's busy "to-do" list may also be contributing to the slight decline in his overall approval rating.

"I think he's put forward an aggressive agenda on guns immigration gay rights. It's hard to get much beyond 50% with that approach, unless the president gets a big tailwind from faster economic recovery," says CNN Senior Political Analyst and National Journal Group's Editorial Director Ron Brownstein.

And Holland agrees that there may be more to the slight dip other than just tradition. While President George W. Bush had a lot on his plate at the start of the second term, his one major controversial push right out of the gate centered on Social Security reform.

"President George W. Bush's approval ratings remained constant in early 2005, so there may be more at work here. Obama has promised to spend political capital to achieve some of his more controversial goals on immigration, gun control and climate change. If his approval rating has changed, it may be a sign that some of that capital has already been spent," says Holland.