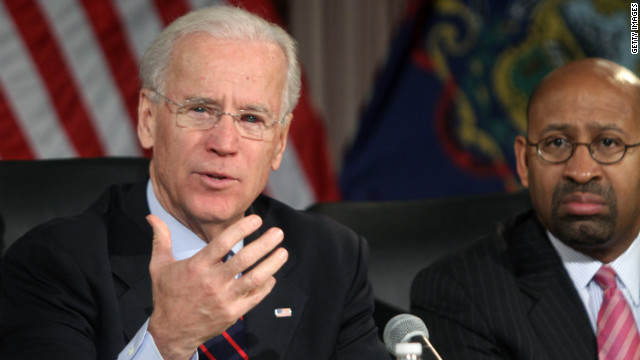 Biden says gun proposals do not equate a 'slippery slope'

"If we remain silent in the face of this tragedy, I think we're going to be judged really harshly," he said Monday. "I really mean that."

The vice president held a roundtable meeting in Philadelphia with law enforcement officials and the mayor, Michal Nutter, to discuss gun violence in a city that had 331 homicides last year. In January of this year, 17 people died in gun-related deaths, and at least 71 victims were shot, according to the Gun Crisis Reporting Project.

"There is a sense of urgency for the United States of America, the federal government and local governments to act. There is no conflict-none, zero–of any of those things that were suggested here today with the Second Amendment," Biden said.

Biden vowed that he and the president would "continue to travel the country" to rally support for the gun proposals, among which include an assault weapons ban, a limit to high capacity magazines and universal background checks.

President Barack Obama is set to address the issue in his State of the Union address on Tuesday, as well as during a visit to Chicago on Friday.

And while an assault weapons ban similar to the one that expired in 2004 seems increasingly unlikely to pass through Congress, Biden still mentioned it as a proposal he'll take to the American people.

But opponents, including the National Rifle Association, argue that new firearm legislation will violate the rights of gun owners and make little to no strides in preventing gun violence.

Biden sought to quell those concerns Monday, saying the proposals he's calling for will not propel a series of increasingly tough gun laws.

"The slippery slope we're on are our children and our neighborhoods and our cities and our rural communities are in jeopardy," he said. "That's the slippery slope I'm worried about. It's not this notion that somehow we're going to end up taking away my two shotguns because of what we're doing here. That's bizarre."

The vice president said the group of local and law enforcement officials discussed a number of proposals dealing with gun violence, firearm trafficking and mental health.