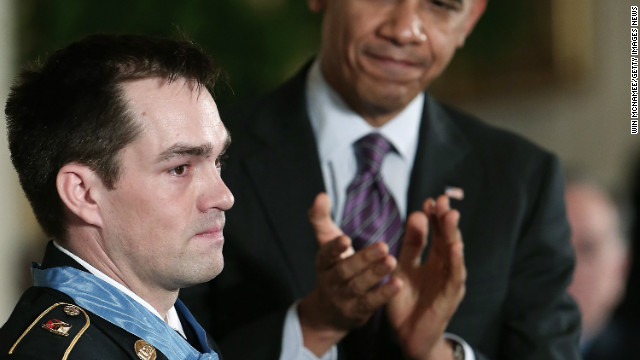 DEVELOPING: HAGEL VOTE COMING TUESDAY, WITH HIS PROSPECTS IMPROVING… The Senate Armed Services Committee will vote on the nomination of former Sen. Chuck Hagel for defense secretary at 2:30 p.m. ET on Tuesday, the panel’s chairman, Carl Levin, said. … CNN learned last week there were at least five Republican senators who would oppose a filibuster, essentially ensuring the embattled nominee will be approved in the coming days. "There's a whole lot of hype and drama, but if he has 60 votes, he has 60 votes. And he probably does," a senior GOP Senate aide told CNN on Monday. – Ted Barrett and Gloria Borger

CASTELLANOS PREVIEWS THE STATE OF THE UNION WITH A QUESTION: WILL OBAMA’S STATE OF THE UNION HURT DEMOCRATS? CNN contributor and Republican strategist Alex Castellanos writes for CNN.com/Opinion: “If Barack Obama had previewed his inaugural speech before the November election, would he have been able to give it in January? Apparently, our president did not think so. From the first days of his re-election campaign until as recently as a month ago, President Obama described himself “a pretty practical guy” who is “not driven by some ideological agenda.” Dispensing with that fiction in his inaugural address, he's been commended for finally and honestly revealing himself. No longer is Barack Obama a national Rorschach test in which anyone can see anything. He has staked his ground: President Obama is an unabashed advocate of the old-fashioned American left. That's not good news for Democrats who have trekked with him to the end of an ideological limb.” – Alex Castellanos

TRAIL TRIVIA
(Answer below)
Why did President Thomas Jefferson decide to have his State of the Union read to Congress, instead of giving the speech himself?

We watched an American hero today solemnly accept the Medal of Honor for his brave actions during an overwhelming Taliban attack on a U.S. outpost in Afghanistan. At the ceremony honoring former Staff Sergeant Clint Romesha, President Barack Obama recounted the deadly attack that resulted in the deaths of eight soldiers.

“With gunfire impacting all around him, Clint raced to one of the barracks and grabbed a machine gun,” the president said. “He took aim at one of the enemy machine teams and took it out. A rocket-propelled grenade exploded, sending shrapnel into his hip, his arm and his neck, but he kept fighting, disregarding his own wounds and tended to an injured comrade instead.”

After the ceremony, reluctant hero Clint Romesha delivered a short statement where he highlighted the actions of others and then quietly walked away.

Members of the media, ladies and gentlemen, good afternoon.

Thank you for sharing this very special day with me. I stand here with mixed emotions of both joy and sadness for me today. I don’t think I am much different than the Medal of Honor recipients Sgt. First Class Petry and former Staff Sergeant Giunta. I am feeling conflicted with this medal I now wear. The joy comes from recognition from us doing our jobs as soldiers on distant battlefields, but it is countered by the constant reminder of the loss of our battle buddies, my battle buddies, my soldiers, my friends.

I am grateful that some of the heroes of Combat Outpost Keating are here today with us. And any one of them will tell you, we were not going to be beat that day. I want them to know how proud I am of them. They trusted in me, a non-commissioned officer, to be their leader and I thank them so much for that loyalty. I accept this tremendous honor on behalf of all soldiers who have served with me that day.

This award is for the eight soldiers that didn’t make it and for the rest of the team that fought valiantly and magnificently that day. I will forever be humbled by their bravery, their commitment to service and their loyalty to one another. Serving our nation in uniform is a privilege, especially during times of war. Like my grandfather, my father and my brothers, I am proud to have the opportunity to serve with some of the finest soldiers today, not only during our mission in Afghanistan, but on all my deployment and tours during my 11 years in the army.

Our military service is strengthened, thanks to the tremendous support provided by our military families and the American public. The strength of my wife and my family during my service is a key factor in my morale and my will to fight. My loving wife has been a constant source of strength and inspiration, thank you Tammy, you are my rock. And thank you.

Our colleague Jake Tapper has written a compelling account about Romesha and the battle that we encourage you to read.

Leading CNNPolitics: Obama's second act: Why State of Union speech may do little to fix Washington
It is the second big speech of his presidency's second act, but there is little or nothing to suggest President Barack Obama's State of the Union Address offers any hope of a new beginning or a new spirit in divided Washington. Consider the vast partisan differences in expectations. “Obama core supporters are getting what they hoped for in 2009,” says veteran Democratic pollster and strategist Peter Hart. “He is a president who seems both more confident and at the same time at home with himself both legislatively and philosophically.” If there is one certainty in today's political climate, it is that when one party is happy, the other is not. – John King

Leading Drudge: Steps Aside
Pope Benedict XVI is to resign at the end of this month after nearly eight years as the head of the Catholic Church, saying he is too old to continue at the age of 85. The unexpected development – the first papal resignation in nearly 600 years – surprised governments, Vatican-watchers and even his closest aides. The Vatican says it expects a new Pope to be elected before Easter. – BBC

Leading HuffPo: Great Minds Think Alike
A firestorm on the right has greeted a new Karl Rove-backed super PAC aimed at knocking off weak conservative Senate candidates and protecting strong incumbents in GOP primaries, but the new PAC may well prove to be a plus in the eyes of Senate Minority Leader Mitch McConnell. That’s not surprising: The model for the new super PAC, dubbed the Conservative Victory Project, is akin to one that McConnell has touted the need for at GOP events in recent years, two GOP fundraisers with good ties to the senator told Huffington Post. Both asked for anonymity to speak candidly about private events and discussions. – Peter H. Stone

Leading Politico: Obama's State of the Union: Aggressive
President Barack Obama’s State of the Union speech will be less a presidential olive branch than a congressional cattle prod. Emboldened by electoral victory and convinced the GOP is unwilling to cut deals, Obama plans to use his big prime-time address Tuesday night to issue another broad challenge at a Republican Party he regards as vulnerable and divided, Democrats close to Obama say. – Glenn Thrush

Leading The New York Times: Obama to Renew Drive for Cuts in Nuclear Arms
President Obama will use his State of the Union speech on Tuesday to reinvigorate one of his signature national security objectives — drastically reducing nuclear arsenals around the world — after securing agreement in recent months with the United States military that the American nuclear force can be cut in size by roughly a third. Mr. Obama, administration officials say, is unlikely to discuss specific numbers in the address, but White House officials are looking at a cut that would take the arsenal of deployed weapons to just above 1,000. Currently there are about 1,700, and the new strategic arms reduction treaty with Russia that passed the Senate at the end of 2009 calls for a limit of roughly 1,550 by 2018. – David E. Sanger

- Obama honors Romesha, ‘band of brothers’ -
PRESIDENT BARACK OBAMA AT CLINT ROMESHA’S MEDAL OF HONOR CEREMONY: “When I called Clint to tell him that he would receive this medal, he said he was honored but he also said, ‘It wasn't just me out there, it was a team effort.’ And so today, we also honor this American team, including those who made the ultimate sacrifice. … These men were outnumbered, outgunned and almost overrun. Looking back, one of them said ‘I'm surprised any of us made it out.’ But they are here today, and I would ask these soldiers, this band of brothers, to stand and accept the gratitude of our entire nation.”

- Pope steps down, Americans react -
VICE PRESIDENT JOE BIDEN AT A GUNS EVENT IN WILMINGTON, DELAWARE: “His decision reinforced in me, as a practicing Catholic that this is a man of great integrity and looking out for the people he believes is the best interest of our church and I admire him for that. … I think he sets an incredibly high standard.”
ARCHBISHOP OF WASHINGTON, CARDINAL DONALD WUERL, AT A PRESS CONFERENCE: “I think it is a sign of the great humility of this pope and his love of the church and his courage to recognize as he says in his declaration that he has come to the conclusion that he doesn't have the energy, the physical energy any longer to discharge his duties as pope. That recognition says to me he is a very humble and honest person. And his love for the church is such that he has concluded that it would be better not to try to lead this huge flock without the full strength of all of his energies.”

- Carney previews Obama’s State of the Union -
PRESS SECRETARY JAY CARNEY AT THE WHITE HOUSE BRIEFING: “You will hear in the president's State of the Union an outline from him for his plan to create jobs and grow the middle class. The president has always viewed the two speeches - the inaugural address and the state of the union - as two acts in the same play. And the fact is, while there was a focus on some of the other elements of the inaugural address, that the core emphasis that he has always placed on, in these big speeches remains the same and will remain the same, which is the need to make the economy work for the middle class.”

- Price puts off Senate decision, says he will decide in May -
REPUBLICAN REP. TOM PRICE OF GEORGIA IN A WRITTEN STATEMENT TO THE PRESS: “The election of Georgia's next senator is 21 months away and there is plenty of time for campaigning. To announce a decision prior to the completion of the work on the debt ceiling and critical fiscal policy in May 2013 would be distracting and unwise. At that time, Betty and I will then be prepared to come to a decision on my candidacy for the U.S. Senate as Georgia's conservative voice.”

- After saying no to Senate, Brown #humblebrags -
FORMER REPUBLICAN SEN. SCOTT BROWN OF MASSACHUSETTS IN AN INTERVIEW WITH WSHM: “My wife and children wanted me to do it. I would've been able to raise the money, and every poll had me up by about 20 points so yes, of course, I was thinking about it.”

Though Presidents George Washington and John Adams decided to deliver their annual speeches to Congress, the third president, Thomas Jefferson, discontinued the practice in 1801 because he believed the ceremony too closely resembled a king addressing his subjects.

Instead, Jefferson’s private secretary carried a written message to Congress and it was read by the clerk of the House.

This practice stuck for 112 years, until President Woodrow Wilson, in 1913, went back to delivering the address in person. Since then, almost every president has followed Wilson’s lead.