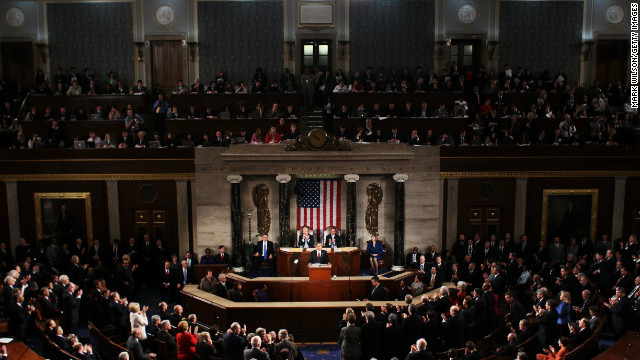 Lawmakers invite gun violence survivors to State of the Union

(CNN) – President Barack Obama will spend the bulk of Tuesday's State of the Union address talking about jobs and the economy, administration officials have told CNN.

But as he addresses the joint session of Congress, one group in the House chamber will be listening for something else: the president's remarks on gun control.

Seated in the gallery will be at least 20 survivors of gun violence invited to attend the annual event by members of Congress, who are each given one ticket for a guest to view the speech in person.

"This is a way of continuing the momentum, keeping the focus on the need for gun control legislation so we can further protect the people in our communities," Rep. Jim Langevin, D-Rhode Island, told CNN's Brianna Keilar on Sunday. A gun accident in 1980 left Langevin a quadriplegic.

Among the lawmakers inviting gun violence survivors to Tuesday's speech is Rep. Nancy Pelosi, the House Democratic leader. Democratic lawmakers who represent Newtown, Connecticut and Aurora, Colorado, are also inviting people affected by violence. Both of those communities were sites of deadly shootings in the last year.

People who were affected by both those shootings will be at Tuesday's speech. Carlos Soto, Jr., whose older sister Vicki was a teacher at Sandy Hook Elementary school, was invited by Rep. Rosa DeLauro, D-Connecticut. Soto was killed as she attempted to hide her first grade students.

Other invitees include parents of children gunned down in gang violence, and family members of police officers who were shot.

In a letter to colleagues in the House Democratic caucus last month, four lawmakers wrote it was "vital that we include the American public and give a voice to our constituents as we search for comprehensive solutions to this problem."

"It is our hope that their presence in the House Gallery will send a strong message that it is long past time to act," the Democrats wrote. The signers were Reps. Langevin, Carolyn McCarthy, Keith Ellison, Rosa DeLauro and David Cicilline.

Joining the group invited by the Mayors Against Illegal Guns effort will be Gabby Giffords and Mark Kelly, who were invited to attend the State of the Union by Rep. Ron Barber and Sen. John McCain. Both Barber and McCain represent Arizona, the state where Giffords was seriously injured during a shooting in 2011.

And the parents of Hadiya Pendleton, the 15-year-old Chicago girl shot and killed in Chicago last month, will be guests in first lady Michelle Obama's box Tuesday. Pendleton was killed just a week after she performed in the festivities surrounding President Barack Obama's second inauguration, and the first lady attended her funeral on Saturday.