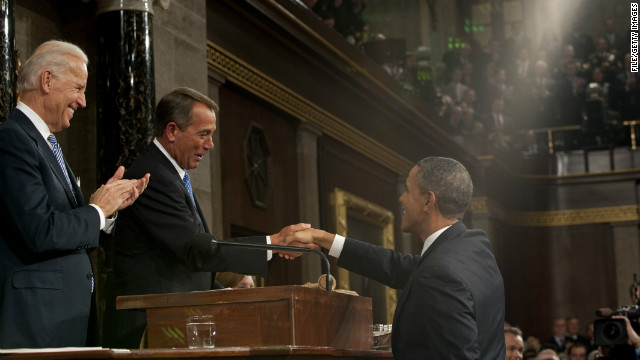 Obama set to challenge and persuade

Washington (CNN) - When President Barack Obama speaks on Capitol Hill Tuesday night he'll have a club in one hand and an olive branch in another, figuratively speaking.

According to Democrats close to the administration, he'll challenge Republicans to get on board with his economic agenda, including his plans for deficit reduction, broad tax reform and new investments.

Two sources close to the White House describe the president's approach to Republicans on the economy this way: "If you don't get it done, I will."

Multiple administration officials say he will point to the looming deadline of across the board spending cuts and argue the economy will suffer if Congress doesn't take action. And Democrats close to the White House say he'll make the case for tax reform and economic equality. For example, one source says, he might argue Washington should not protect subsidies for oil companies while kids lose funding for Head Start, or that middle class teachers should not pay more in taxes than hedge fund managers.

But administration officials insist the president will emphasize common ground on other domestic priorities. He'll acknowledge bipartisan progress on immigration reform. On gun laws he'll emphasize a universal desire for improved safety and call for Congressional action. On both fronts, aides say, he won't unveil new policy but use the speech to advocate for the proposals he's already backed. The chamber will be filled with victims of gun violence, driving the message to viewers at home.

The president's aides describe the speech as the policy-complement to the inaugural address, which was a philosophical statement of the president's beliefs. Expect him to address many of the same themes: climate change, gay rights and women's rights. Sources say he will acknowledge the progress that has been made toward expanded equality and address next steps to advance this agenda.

As is customary in his State of the Union addresses, the president will spend less time on foreign policy than on the economy. But multiple sources tell CNN he will discuss the drawdown of U.S. troops in Afghanistan, the war on terror, the U.S. relationship with China and the pivot to Asia. Those close to the administration say he is also likely to announce the start of discussions for a trade agreement between the U.S. and the European Union; Europe is the United States' top trading partner.

Sources tell CNN Obama views this speech as his greatest opportunity to make his economic case to the American public for the second term. An average of 43 million Americans has watched his State of the Union addresses.

This will be the last major address in which the president's chief speechwriter, Jon Favreau, plays a role. Favreau leaves the White House at the end of the month. His successor, Cody Keenan, has been leading the effort to draft this year's State of the Union.