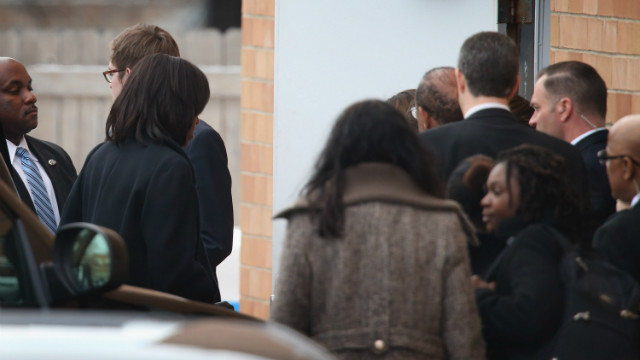 Parents of slain Chicago teen to attend State of the Union

(CNN) – The parents of Hadiya Pendleton, the 15-year-old Chicago girl shot and killed in Chicago last month, will be guests in first lady Michelle Obama's box at Tuesday's State of the Union, a White House official told CNN.

Pendleton was killed just a week after she performed in the festivities surrounding President Barack Obama's second inauguration. The first lady attended her funeral on Saturday.

The death came as Obama's administration has been focused on reducing gun violence, especially the killing of children, after the December 14 elementary school shooting in Newtown, Connecticut. Pendleton was killed in Hyde Park neighborhood near Obama's Chicago home.

Vice President Joe Biden described to Democratic members of Congress last week how Pendleton "marched by me and the president and the rest of you on inauguration day leading with pride and promise her high school band gunned down in a park just outside her school in broad daylight."

"This was no ordinary child," he said. "She was a child who had used social media, urging her friends to speak out - don't join gangs. And now she's gone."

On a trip to Chicago Friday, President Obama will discuss the rampant gun violence in Chicago, where over 500 people were murdered last year.

"The president will travel to Chicago for an event amplifying some of the policy proposals included in the State of the Union that focus on strengthening the economy for the middle class and the Americans striving to get there," a White House official said Sunday. "He'll, of course, also talk about the gun violence that has tragically affected too many families in communities across Chicago and across the country."

Administration officials said Sunday the president will renew his support for the gun proposals he's already endorsed during his State of the Union address, including a ban on military-style assault weapons and bolstering background checks. He will call for quick action on passing those measures through Congress, the officials said.