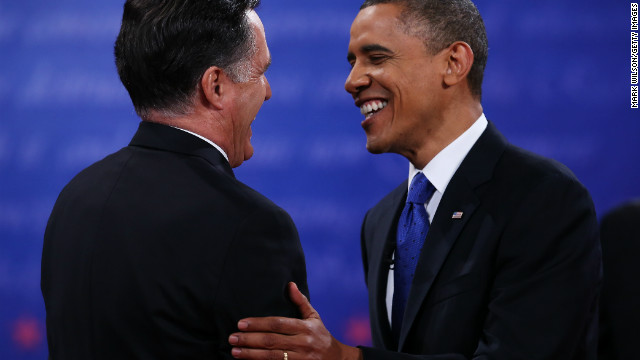 When Obama announced "a non-partisan commission to improve the voting experience in America," the president said he would appoint a top attorney from his campaign as well as one from "Governor Romney's campaign."

"Here's an idea that Governor Romney and I actually agreed on last year: let's tie the minimum wage to the cost of living, so that it finally becomes a wage you can live on," Obama said.

A president mentioning the man he recently defeated in a State of the Union address is extremely unique.

Obama didn't mention Republican Sen. John McCain in his 2009 State of the Union address – a speech given just a few months after handily defeating him at the ballot box.

In 1997, after defeating Sen. Bob Dole in the 1996 election, President Bill Clinton didn't mention his opponent either.

Clinton did, however, mention Dole in his 1996 State of the Union.

"We owe thanks especially to our veterans of World War II," Clinton said. "I would like to say to Senator Bob Dole and to all others in this Chamber who fought in World War II, and to all others on both sides of the aisle who have fought bravely in all our conflicts since: I salute your service, and so do the American people."

The reason Obama chose to mention Romney, according to Maria Cardona, a Democratic strategist and CNN contributor, is more for the American people and less for the members of Congress in attendance.

"The reason he is mentioning Romney now is to continues to bolster his case to the American people that was he is proposing are not left, socialist programs, that they are actually programs that have historically been supported and advocated by Republicans, including his opponent in the last election, Mitt Romney," Cardona said after the speech.

While, according to Cardona, Romney doesn't have much clout with Republicans in the House and Senate, he does have a lot of name recognition among American voters.