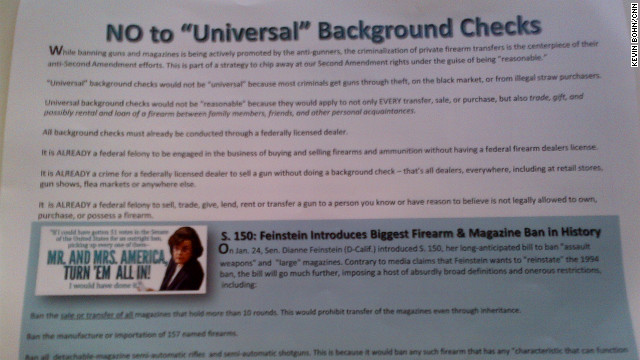 Washington (CNN) - The National Rifle Association is trying to build momentum against the proposed expansion of background checks for gun purchases.

At a gun show in the Virginia suburbs this weekend the NRA's lobbying arm set up a booth to lobby against the gun control measures being pushed by the White House. Prominently displayed at the booth were two signs – one opposing the bill being pushed by Sen. Dianne Feinstein, D-California, that would ban military style assault weapons and the other was against imposing universal background checks saying they "would not be universal."

NRA officials handed out a flyer titled: "NO to 'Universal' Background Checks" saying "While banning guns and magazines is being actively promoted by the anti-gunners, the criminalization of private firearm transfers is the centerpiece of their anti-Second Amendment efforts. This is part of a strategy to chip away at our Second Amendment rights under the guise of being 'reasonable.'"

What gun control proponents are trying to do is close the so-called "gun show loophole," which allows many private purchases, many of which occur at gun shows, not to have undergo federal background checks.

Any purchase by a federally licensed dealer – whether at a store or at show – must undergo such a check.

The Law Center to Prevent Gun Violence, however, estimates 40% of gun purchases in the U.S. each year are through private sales – ones that don't undergo background checks.

Some political experts have said the expansion of background checks has the best chance of the various proposals to pass.

But the NRA is pushing back hard. It has prominently posted an op-ed, first printed in USA Today, by Executive Vice President Wayne LaPierre on the front page of its website in which he says: "Criminals won't participate in a 'universal' system. They'll always steal or get their guns, and everything else they want, on the black market. Reasonable people know that criminals will never be part of the 'universe.'"

The group Mayors Against Illegal Guns sponsored an ad in the Washington, D.C. area during the Super Bowl to lobby for the checks expansion by highlighting a 1999 comment LaPierre made: "We think it's reasonable to provide mandatory, instant criminal background checks for every sale at every gun show. No loopholes anywhere. For anyone."

The fight over gun control is playing a prominent role in the lead-up to President Obama's State of the Union with both sides trying to take advantage. Members of Congress have invited more than 120 survivors and family members of victims of gun violence to attend the president's address, and some of them will be featured at a Washington press conference Tuesday to demand action on the gun control proposals before Congress.

On the other side the NRA is continuing to see a major influx of new members spurred by the debate. The organization set a record of 450,000 members two weeks ago. Those attending last weekend's show – the largest in the D.C. area - got a free admission into the show if they joined the NRA or renewed their membership.

The show hiked its entrance fee this year. Organizers posted a sign outside the show warning: "Admission has gone up because we are using the money to fight so you can keep and bear your guns." It also said it has already spent $25,000 "to stop impending legislation by hiring lawyers, lobbyists and writing bills."

There were waits throughout the weekend to get into the show. Once they were inside, besides the NRA booth, there were not many obvious signs of the raging debate. One dealer did post a note at his booth saying "Obama hates me."