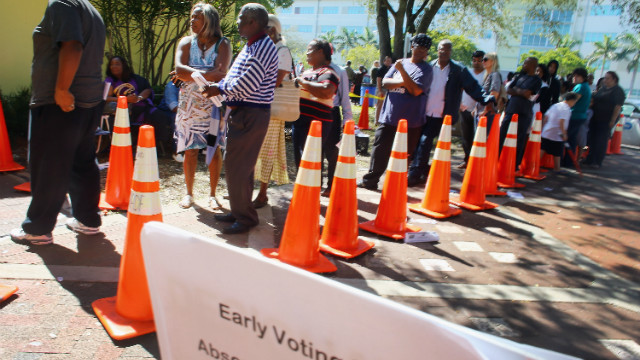 (CNN) – 102-year-old Desiline Victor is among first lady Michelle Obama's guests at the State of the Union Tuesday - and her example is meant to drive home President Barack Obama's commitment to protecting voting rights made during his inaugural address. In that speech he said, "Our journey is not complete until no citizen is forced to wait for hours to exercise the right to vote."

Victor, a naturalized U.S. citizen originally from Haiti, waited in line for three hours to cast an early vote ballot in Florida. According to voting rights advocates who know Victor's story, when she returned later in the day other people in line urged election officials to get her in to vote. It was her second time filling out a ballot since she became a citizen in 2005.

The president's power to alter voting practices is limited. Only Congress has the power to create national standards. Voting rights advocates are calling for uniform rules around early voting, voter identification laws and means of registration but this cannot be done by executive action.

The U.S. Supreme Court will hear a challenge to the Voting Rights Act this month, which could allow states to make voting more restrictive.

The president will announce the creation of a bipartisan election assistance commission to suggest voting standards to improve voting access and cut down on wait times, according to a Demcorat aware of the speech.

An MIT Survey of the Performance of American Elections found that blacks and Hispanics waited almost twice as long to vote as whites in the 2012 election. Lines were longer in cities and in the South. A study conducted by the Orlando Sentinel and Ohio State University professor Theodore Allen showed 200,000 voters in Florida gave up on trying to vote out of frustration over long waits.

"These problems could be fixed with federal voting standards, including early voting and modernized registration, to ensure that elections are free, fair and accessible," Judith Browne Dianis, co-director of Advancement Project said. "Currently we have 13,000 different jurisdictions who run elections 13,000 different ways."