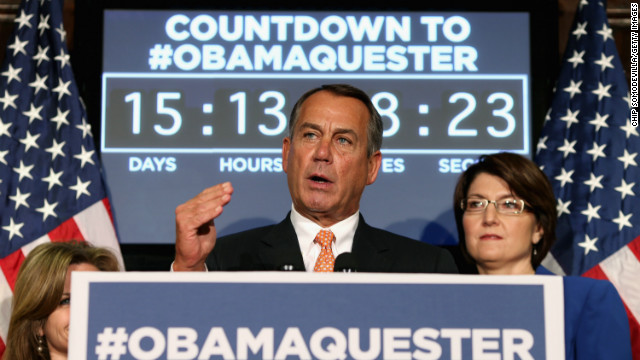 Washington (CNN) - With a little over two weeks before automatic spending cuts hit all federal agencies, House Speaker John Boehner said they are "bad policy" but restated his position that the House will not act to replace the so called "sequester," saying it was up to the Senate to pass a bill to lay out alternative cuts.

"We've played our cards, we laid out our hand - passed those bills and nothing happened. It' time for the Senate to do its job," Boehner told reporters on Capitol Hill.

Boehner is also expected to send out a letter Wednesday to all House members telling them to prepare for the impact of the cuts, which will also force all lawmakers, committees and administrative offices to cut their budgets.

"We're prepared to deal with it and I would hope that it wouldn't happen," Boehner said.

But when asked whether he would personally take a pay cut, the speaker sidestepped the question.

Even with the deadline looming on March 1st and defense officials and government agencies warning that the impact could trigger another recession and damaging cuts could undermine national security, there is no bipartisan solution on the horizon.

In the last Congress, the GOP-led House passed the same measure twice to replace the across the board cuts with another set of federal reductions, but that bill went nowhere in the Democratic controlled Senate. Senate Democrats are expected to roll out their own proposal this week, with a mix of spending cuts and new revenue. But Congressional Republicans have made it clear any tax increases to avoid the sequester are a non-starter.

Boehner criticized the automatic spending cuts, even though they were part of a debt ceiling proposal he brokered, and has worked to pin the blame for them on Democrats.

"The sequester is bad policy. It's taking a meat ax approach to cutting government spending. That's why the President ought to be forthcoming with a plan to replace his own sequester," the speaker said.