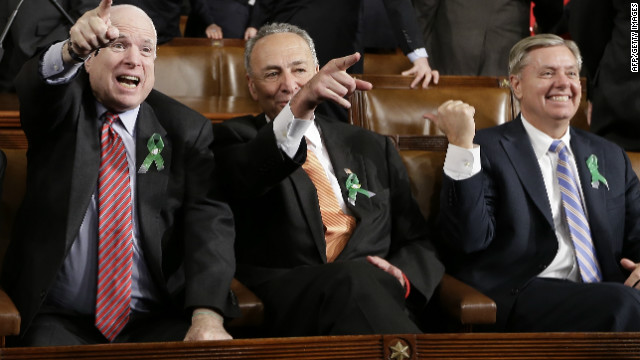 The seating arrangement raised the question: Could the trio be dubbed the next "Three Amigos?"

McCain, Graham and independent Sen. Joe Lieberman–all good friends–held the informal distinction before Lieberman retired in January. They frequently traveled together and lined up on the same side of some high-profile issues.

CNN Chief Congressional Correspondent Dana Bash reported Tuesday night that Schumer sat with his two longtime Republican colleagues so they could stand together and applaud when the president talked about immigration reform.

All three are part of the "Gang of Eight" group of senators who outlined a bipartisan framework last month for an immigration plan to be further detailed in March.

Each of the three senators also wore a green ribbon on their lapel, a symbol worn by many lawmakers in the House Gallery Tuesday night in honor of the victims of the Connecticut elementary school massacre.

McCain tweeted Wednesday the above photo taken shortly before the speech–where it looks like they're spectators of a baseball game rather than the State of the Union.