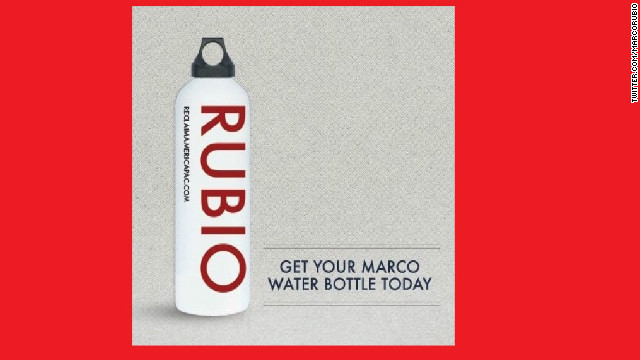 (CNN) – Sen. Marco Rubio’s awkward sip of water Tuesday may have fueled jabs from his political rivals, but even his friends saw an upside to the viral moment.

“If you've watched the media coverage … you might think that Marco spent the entire time gulping gallons of water,” the missive to supporters read, arguing the media focus on the sip was intended to district from the Florida Republican’s message.

“What he said was too conservative, too convincing and frankly too inspiring for some in the media and their liberal allies,” the letter said. “So instead of attacking his message they attack the messenger. We've seen it before but it won't work this time.”

“Don't get angry at the liberals who want to bury what Marco said. Laugh at them,” the note concluded, with a link where backers could purchase the Rubio-branded water bottles.

Rubio himself pitched the water bottles to his Twitter followers, after writing:

And what about the manufacturer of Rubio’s choice of water Tuesday, Poland Spring?

“We are delighted that in Senator Rubio’s moment and need of refreshment, Poland Spring was right there on hand for him. Just like millions know, water is a great refresher. We think he had a great sense of humor about it all,” Poland Spring spokesperson Jane Lazgin told CNN.

“We are very glad that people reach for Poland Spring from the left and the right,” she added.