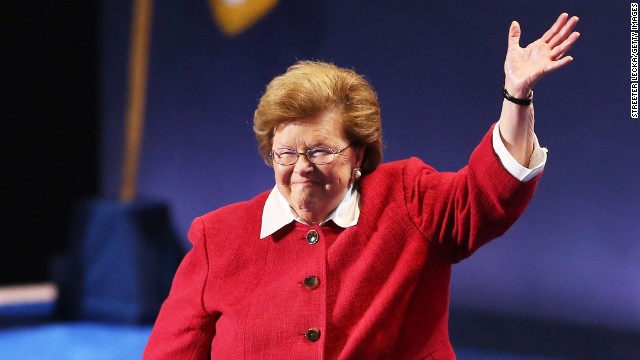 (CNN) - It's far from unusual to hear that a senator is seeking to score political points.

But summing up points in a board game? That's a much less frequent happening on Capitol Hill.

Sen. Barbara Mikulski tallied up Thursday the letters to an 18-point word being bantered around Washington.

"What I want to talk about is sequester," she said on the floor of the Senate. "Sequester is a three - six - nine letter word which would be a big hit in a Scrabble game, but it's a lousy word for the game of life and the functioning of our economy."

The word has been on the lips of Washington lawmakers for months and refers to government spending cuts. It is also a verb meaning to separate or segregate.

In this case, it is the legislative term for cuts President Barack Obama and Congress agreed to in the summer of 2011 as an incentive to agree to other deficit reduction plans. Neither Democrats nor Republicans are a fan of the across-the-board cuts which include equal cuts to defense and non-defense programs.

The cuts were set to take effect in January but the temporary measure to avert the fiscal cliff pushed the cuts back to March. Lawmakers have not yet arrived at an alternative to those cuts.

But perhaps they'll come together and arrive at a plan - over a game of Scrabble.