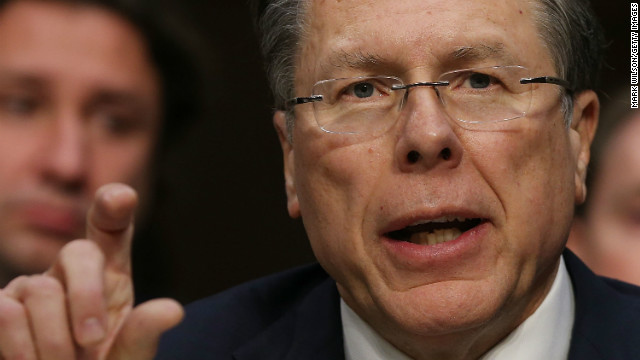 (CNN) - Continuing his charge against the Obama administration on gun control proposals, Wayne LaPierre of the National Rifle Association charged Thursday that President Barack Obama's proposals in the State of the Union address were "not about keeping kids safe at school" but rather part of a broad campaign to "dismantle the Second Amendment."

"A year ago, I began to warn American gun owners all over this country that if re-elected President Obama would set about dismantling the Second Amendment to our Constitution of the United States - that with no more elections to worry about, the president would wait for the right political opportunity to exploit and launch the most aggressive campaign in history to destroy our Second Amendment rights," he added, speaking at the annual convention for the National Wild Turkey Federation in Nashville.

The speech came one day after LaPierre issued a rally-cry for gun owners, writing in an op-ed that "good Americans are prudently getting ready to protect themselves" against what he described as an onslaught of doom.

"It's responsible behavior," he continued. "And it's time we encourage law-abiding Americans to do just that."

LaPierre's comments Thursday focused on school safety, which Obama spoke about in the wake of the December 14 mass shooting at Sandy Hook Elementary School in Newtown, Connecticut that left 20 students dead.

But with Obama's speech this week, he said "…that charade ended at the State of the Union."

He renewed his call for adoption of the NRA's program to put armed and trained security officers in schools to protect students, and pledged the NRA's growing membership would "stand and fight throughout this country for our freedom" to defend themselves.

LaPierre has been a leading yet controversial voice against gun control proposals as Washington grapples with a flood of firearm legislation in the wake of Newtown shooting.

In his State of the Union Address, Obama called for lawmakers to bring all of the proposals, including an assault weapons ban, forward for consideration.

LaPierre wrote Wednesday that defenders of gun rights are more fired up than ever to purchase firearms-not because they fear conflict with the government, as some have argued, but because they "anticipate confrontations where the government isn't there."

As examples, he cited stories of looting after Superstorm Sandy, claimed terrorists would infiltrate through the U.S. southern border and warned of a lack of funds to pay for police protection should Obama's fiscal policies result in economic disaster.

"No wonder Americans are buying guns in record numbers right now, while they still can and before their choice about which firearm is right for their family is taken away forever," he wrote.

White House Senior Adviser David Plouffe responded to the op-ed, writing on Twitter Wednesday that it's "hard to believe this is real. Every GOPer should read and decide if this delusional person will call the shots."

Obama spoke on the issue Thursday when asked about gun control in an online chat.

"I actually don't think we should ban handguns, but keep in mind that what we're trying to do is come up with a package that protects Second Amendment rights but also makes a meaningful difference in reducing violence," he said in a "Google Hangout" online chat.

LaPierre further laid out a four-year plan for a "resistance movement" that entails fighting legal battles against gun law legislation, boosting NRA membership, and strengthening the organization financially. Deep into his op-ed, he called for donations-"$20, $50, $250, or $1,000 at a time-and dedicated several paragraphs to reasons why the group needed more members.

"An even stronger NRA is the only chance gun owners have to withstand the coming siege," he wrote, saying the group is launching a "full-court initiative" to recruit more "lover(s) of freedom." The group already one of the largest advocacy organizations, with four million members.

"This begins with remembering to keep your own membership active, or reactivate it if it has lapsed," he continued. "It means reminding yourself, 'I have a son and daughter who aren't members and should be'."

The Brady Campaign to Prevent Gun Violence said in a statement from spokeswoman Debra DeShong Reed that the "NRA leadership and their lobbyists are out of touch with their own members.

"We believe it is absolutely possible to have sensible gun laws to curb the epidemic of gun violence in our country while respecting the 2nd Amendment. Clearly so do most members of the NRA and the leadership should listen to their own members," she wrote in a statement.

LaPierre also blamed the media, certain lawmakers and high-profile figures, such as New York Mayor Michael Bloomberg, for making Americans "feel guilty about buying a gun."
"The enemies of freedom demonize gun buyers and portray us as social lepers," he added.

Concluding his op-ed, LaPierre vowed that NRA members "will not surrender."