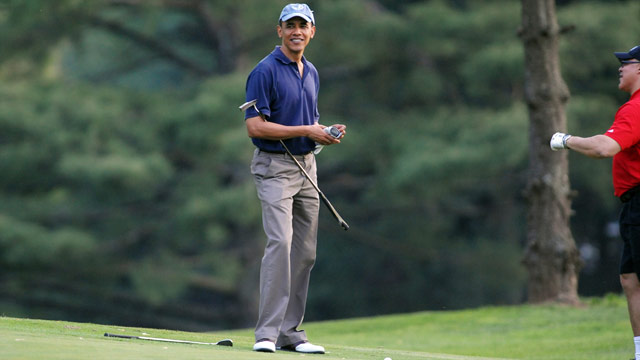 Palm City, Florida (CNN) - President Barack Obama won't be hanging by the beach during his Florida vacation this weekend – unless he ends up stuck in a sand trap.

While his wife and daughters are in Colorado skiing, the president will hit the course at the Floridian golf club, an expansive resort in Palm City, Florida.

Obama worked on his swing with legendary golf teacher Butch Harmon, who coached Tiger Woods and “rode along with the president for a few holes in the afternoon,” according to White House spokesman Josh Earnest.

"I've played golf with Ike, Nixon, Ford and President Bush 41," Harmon told the publication Golf Digest. "I know the president is a real keen golfer. I'm looking forward to it. It should be fun," Harmon told Golf Digest.

"If I had the opportunity to give the president some help, I would advise him to make a better turn on his backswing, both with his hips and his shoulders," Harmon said in a separate Golf Digest interview.

Earnest told reporters, "The president is looking forward to spending President's Day weekend with some friends in Florida, and I'm sure they'll take advantage of the opportunity to play some golf."

Temperatures were in the 70s and skies were sunny Saturday morning. Obama arrived late Friday night to rain after wrapping up his State of the Union tour in his hometown of Chicago.

The remote golf club is obscured from roadside view by gates, trees and brush. It sits alongside the St. Lucie River.

Several members of the administration are traveling with the president, but the White House made it clear that this is a vacation weekend.

His golfing five-some included one member of the administration – U.S Trade Representative Ron Kirk. Jim Crane, a Democratic donor who owns the resort and Houston Astros, played as well, as did three friends of the president: Dr. Eric Whitaker, Tony Chase and Milton Carroll.

Obama will golf again with Crane on Sunday, according to the Major League Baseball website, which reported the president called him earlier this week.

“I got a call on the cell phone last week and (Obama) said, 'Hey, thanks for letting us come in,'" Crane said, according to MLB.com. "It's going to be a fun weekend. I hope he gets some rest and relaxes. It's kind of a quiet place, so hopefully he'll be able to do that."