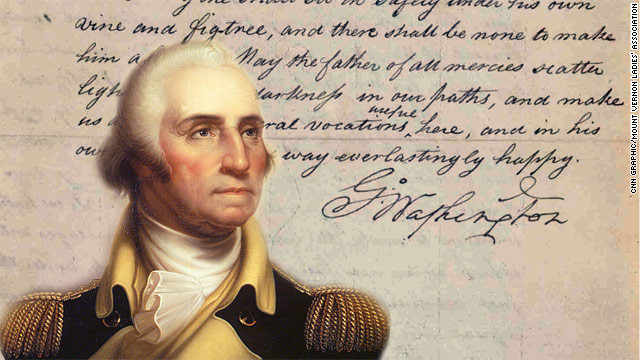 DEVELOPING: RETIREMENT WATCH CONTINUES, as Sen. Mike Johanns (R-Neb.) adds his name to the list of senators not seeking re-election in 2014:

DEMOCRATS – Not running for re-election in 2014:

REPUBLICANS – Not running for re-election in 2014

JUST IN: HAGEL LETTER TO SENATORS GRAHAM AND AYOTTE DISAVOWING A COMMENT ATTRIBUTED TO HIM IN 2007 ON ISRAEL... Read the letter, which was obtained by CNN’s Kevin Bohn, for yourself.

TRAIL TRIVIA
(Answer below)
Jefferson Davis, who became president of the Confederacy on this day in 1861, refused to become a U.S. General before the Civil War. Why?

In honor of President’s Day, we revisited one of the finest moments in President George Washington’s remarkable life – his farewell address.

The address, which was a collaboration between Washington, Secretary of the Treasury Alexander Hamilton and future President James Madison, first appeared in the September 19, 1796, edition of the Daily American Advertiser. Washington looked at the speech as his political tribute to the nation that he helped create.

In the speech, Washington argues for a traditionally federalist government and reemphasizes his views on political factions and foreign entanglements.

It was Washington’s reflections on age and retirement, though, that struck us on this President’s Day. “Worn out by burdens of the presidency and attacks of political foes,” according to the United States Senate Historical Office, Washington opted to not seek a third presidential term, a decision that set a precedent of peaceful transition between presidents.

In light of Pope Benedict XVI’s decision to resign as leader of the world’s 1 billion Catholics, Washington’s words, tone and advice are ever enlightening:

"… every day the increasing weight of years admonishes me more and more that the shade of retirement is as necessary to me as it will be welcome. Satisfied that if any circumstances have given peculiar value to my services, they were temporary, I have the consolation to believe that, while choice and prudence invite me to quit the political scene, patriotism does not forbid it.

"In looking forward to the moment which is intended to terminate the career of my public life, my feelings do not permit me to suspend the deep acknowledgment of that debt of gratitude which I owe to my beloved country for the many honors it has conferred upon me; still more for the steadfast confidence with which it has supported me; and for the opportunities I have thence enjoyed of manifesting my inviolable attachment, by services faithful and persevering, though in usefulness unequal to my zeal. If benefits have resulted to our country from these services, let it always be remembered to your praise, and as an instructive example in our annals, that under circumstances in which the passions, agitated in every direction, were liable to mislead, amidst appearances sometimes dubious, vicissitudes of fortune often discouraging, in situations in which not unfrequently want of success has countenanced the spirit of criticism, the constancy of your support was the essential prop of the efforts, and a guarantee of the plans by which they were effected.

Profoundly penetrated with this idea, I shall carry it with me to my grave, as a strong incitement to unceasing vows that heaven may continue to you the choicest tokens of its beneficence; that your union and brotherly affection may be perpetual; that the free Constitution, which is the work of your hands, may be sacredly maintained; that its administration in every department may be stamped with wisdom and virtue; that, in fine, the happiness of the people of these States, under the auspices of liberty, may be made complete by so careful a preservation and so prudent a use of this blessing as will acquire to them the glory of recommending it to the applause, the affection, and adoption of every nation which is yet a stranger to it.”

Want to read all of Washington’s masterful words?

Leading CNNPolitics: Johanns to retire after first term
Republican Sen. Mike Johanns, 62, will not seek re-election to a second term in 2014, according to an e-mail he sent to supporters on Monday. “During these many years, we have cherished our time together. So as we think about the next stage of our lives, we want a quieter time with our focus on each other, our family and our faith,” Johanns said in the e-mail, which he signed along with his wife, Stephanie. The senator was elected in 2008 with 58% of the vote and was largely off the radar of potential retirees for the upcoming midterm elections. – Paul Steinhauser and Ashley Killough

Leading Drudge: Back Above $5
Gas prices in Southern California rose again on Monday, leaving some drivers paying over $5 per gallon. CBS2′s Amber Lee reports the average price of a gallon of gas in the Los Angeles-Long Beach area climbed for the 25th consecutive day to $4.29 – over 50 cents higher than last month, according to the Automobile Club of Southern California. CBS Los Angeles

Leading HuffPo: 'Page One': Obama Pressed To Fight 'Sleepwalking' Congress
Hoisting signs that read "Forward on Climate" and "No on Keystone XL," a massive group of protesters gathered on the National Mall Sunday to urge President Obama to take action on climate policy. Organizers of the major rally, including the Sierra Club and environmental activist group 350.org, estimated that there were 40,000 protesters from 30 states in what the groups are billing as the largest climate rally in history. – Lucia Graves

Leading Politico: Group's goal: Get minorities to the Hill
A nonprofit launching this week aims to get more conservative minority staffers on the Hill and to help them climb the ladder once they’ve arrived. The group, called Insight, will start an internship program to help students of color get placed in Republican offices, host professional development events and provide networking opportunities. – James Hohmann

Leading The New York Times: President Plans Decade-Long Effort to Map Human Brain
The Obama administration is outlining a project that would examine the human brain and build a broad map of its activity, seeking to do for the brain what the Human Genome Project did for the study of genetics. – John Markoff

- Sanford addresses infidelity in first ad in congressional campaign –
FORMER REPUBLICAN GOV. MARK SANFORD OF SOUTH CAROLINA IN A TELEVISION AD: “Washington’s math doesn’t add up, and so for years while many have talked, I’ve fought to do something about it – I’ve cut spending, reduced debt and made government more accountable. More recently, I’ve experienced how none of us go through life without mistakes. But in their wake, we can learn a lot about grace, a God of second chances and be the better for it. In that light, I humbly step forward and ask for your help in changing Washington. I’m Mark Sanford, and I approved this message.”

- Obama needs a ‘Plan B’ on guns, says Frum -
DAVID FRUM, A CNN CONTRIBUTOR, IN AN OPINION EDITORIAL ON CNN.COM: “The president himself recognizes that the votes probably aren't there to pass any significant gun legislation through Congress. In his State of the Union address, he was reduced to pleading with Congress to allow a vote at all, never mind actually enact anything. Even if Congress were seized by a sudden change of heart, the measures the president has proposed seem unlikely to achieve much. Universal background checks would be a baby step forward. But until state governments join background checks to some effective system of gun licensing, the checks are very easily evaded. A felon or domestic batterer or disturbed person need only find a person with a clean background to buy a weapon for him.”

- Is immigration reform really a cure all for Republicans? -
REPUBLICAN REP. MICHAEL BURGESS OF TEXAS IN AN INTERVIEW WITH CNN: “People make a mistake when they think that all Hispanics want is to see an amnesty program and then they are going to love Republicans again. It didn't happen in 1988 when George H.W. Bush probably got about the same proportion of Hispanic voters as did Governor Romney this time, two years after this massive amnesty program, which by the way didn't work at the end of the day. In 1996, Bill Clinton legalized about 1.3 million people, just - two months before Election Day, so they could all vote. It's that sort of activity that, again, forgive me, makes me a little cynical about this process.”

- Rush charges that Obama wants plausible deniability -
RUSH LIMBAUGH ON HIS SYNDICATED RADIO SHOW: "Despite the fact that people disagree with the direction of the country and the deficit, unemployment, gun control and all of that, Obama's still at 54% approval. Up until last week, when I raised the curtain on this mystery, everybody asked, “How can this be?” … His entire governing style is centered around the whole concept of plausible deniability.”

Amanda Terkel (@aterkel)
Scott Walker says he gets a "bit of joy" out of "dribbling" out parts of his budget bc it drives the left crazy http://bit.ly/12YQKiJ

Jake Tapper (@jaketapper)
Hey folks! What guests/topics would you like to see on @TheLeadCNN when it launches next month?

jim Spellman (@jimspellmancnn)
Is it true The Lead is coming from INSIDE THE HOUSE!? MT @johnsberman Q for @JakeTapper Is it true the lead could come from anywhere?

Taegan Goddard (@politicalwire)
Hillary Clinton signs with a speaking agency, will start speeches in April or May with payment in the six figures http://politicalwire.com/archives/2013/02/18/hillary_clinton_signs_with_speaking_agency.html

Nina L. Diamond (@ninatypewriter)
The @BurgerKing twitter account has been hacked and switched to McDonald's http://bzfd.it/XnKvQq via @BuzzFeed

Jefferson Davis, the man who became president of the Confederacy on this day in 1861, spent most of his life arguing states rights.

When he was a U.S. senator before the Civil War, he argued that slavery was a state's rights issue, not a federal issue. When he led the Confederacy, he continued that argument and fought the bloodiest war in United States history over it.

But slavery was far from the only arena in which Davis argued states rights.

After the battle of Buena Vista, in which Davis fought "valiantly," according to historic accounts, President James Polk offered to make Davis a brigadier general and the commander of a militia in 1847. In response to what would have been considered a high honor, the future southern leader declined, stating that he believed only states had the right to appoint men to lead militias, not the federal government.