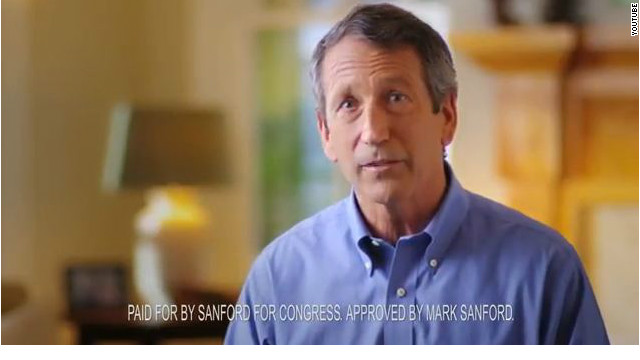 Sanford in first ad: 'None of us go through life without mistakes'

(CNN) – Former Republican Gov. Mark Sanford addressed the controversy that derailed his marriage and reputation in his first television ad for the special election in South Carolina's 1st Congressional District.

"I've experienced how none of us go through life without mistakes. But in their wake we can learn a lot about grace, a God of second chances and be the better for it," Sanford says in the spot, looking directly into the camera.

"In that light," he continued. "I humbly step forward and ask for your help in changing Washington."

Sanford made national headlines in 2009 for admitting in a live press conference that he was involved in an extramarital affair with a woman from Argentina. Sanford and his wife, Jenny, divorced in 2010 and the then-governor finished out his second term in 2011.

The former governor is now engaged to the Argentinean girlfriend, Maria Belen Chapur.

Since launching his bid last month Sanford has openly acknowledged his recent rocky past in television interviews and on the campaign trail.

The new spot will start running Monday on district-wide cable and will expand to broadcast television next week, his campaign said.

While he recognizes mistakes, his primary message in the campaign focuses on a need to cut spending and balance the budget in the nation's capital.

"Washington's math doesn't add up, and so for years while many have talked, I've fought to do something about it – I've cut spending, reduced debt and made government more accountable," he says in the ad.

Sanford represented the district in Congress from 1995 to 2001, before becoming governor. His ex-wife, Jenny, considered a potential run in the special election as well but ultimately decided against it. She told reporters last month that her ex-husband's Mark's ability to handle questions about the affair "will make or break his campaign."

Sanford is running for the seat vacated by Republican Rep. Tim Scott, who was appointed in December to the Senate after  Sen. Jim DeMint resigned from office at the end of 2012 to run the conservative Heritage foundation.

Whoever wins the crowded GOP primary on March 19 is all-but-certain to take the seat, since the district is drawn to favor Republicans.

Elizabeth Colbert Busch, sister of comedian Stephen Colbert, is running on the Democratic side. Rep. James Clyburn of South Carolina, assistant minority leader in the House, endorsed Busch on Saturday.

The general election will take place on May 7.

- CNN's Peter Hamby and Gregory Wallace contributed to this report.