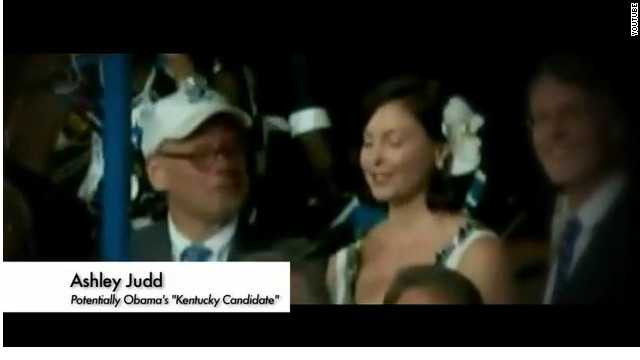 McConnell's campaign released Tuesday its first web video of the campaign, a parody that attempts to depict President Barack Obama as being frustrated with the potential crop of Democratic contenders in the state.

Among those targeted include actress Ashley Judd, a potential Senate hopeful who's expressed interest in the seat and who's been on McConnell's radar for months.

The video features footage of Judd representing the neighboring state Tennessee, a state where she's lived for years, at the 2012 Democratic National Convention. She's also seen saying in the video that San Francisco is her "American city home."

The video continues a line of attack that blasts Judd for not being a true resident of Kentucky. While she partly grew up in the state and graduated from University of Kentucky, Judd has lived elsewhere as an adult, including California and Scotland. She was married to Scottish race car driver Dario Franchitti, but they announced they were getting a divorce earlier this year.

Her website, however, labels Judd an "at least 10th generation Eastern Kentuckian."

Judd actively campaigned for Obama during the 2008 and 2012 elections and has been known for advocating for poverty reduction, immigration rights, environmental issues, public health, and human rights issues. She also graduated from the Kennedy School of Government at Harvard University with a master's degree in 2010.

But the web video released Tuesday suggests that Judd is not Obama's type of candidate.

"We all know President Obama and his liberal allies have made Senator McConnell their number one target," Jesse Benton, McConnell's campaign manager, said in a statement. "We thought we would have a little fun with the problems they've been had (sic) finding someone to carry President Obama's banner in Kentucky."

McConnell, now in his fifth term, isn't the only one to preemptively go after Judd. American Crossroads, the conservative super PAC co-founded by Karl Rove, spent $10,000 on a web ad earlier this month, also hitting Judd for her declared love of Tennessee, where she owns property and where she spent some time as a child.

READ MORE: Almost two years out, it's rough in Kentucky

In the 2014 midterm elections, Democrats will again seek to regain the House majority they lost in 2010. Republicans currently hold a 232-200 majority in the lower chamber. Three seats are vacant. In the Senate, Democrats will be defending 21 of the 35 seats up for grabs in 2014.