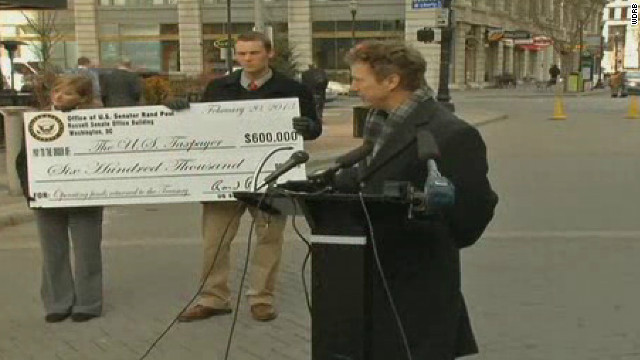 (CNN) – Sen. Rand Paul cut another six-figure check to the United States Treasury Wednesday, taking the money he said he didn't need from his office's budget to make a tiny dent in the nation's massive federal debt.

"We watch every purchase," Paul, a Republican from Kentucky, said at an event next to an oversized check for $600,000. "We watch what computers we buy, what paper we buy, the ink cartridges. We treat the money like it's our money, or your money, and we look at every expenditure."

The $600,000 reflects more than 20% of Paul's annual office budget, according to a press release. Another GOP lawmaker, Rep. Mick Mulvaney of South Carolina, said he would return $160,000 to the federal government, or 12% of his office budget.

“At a time when Americans are tightening their budgets, I have made an effort to do the same with my Congressional office budget," Mulvaney wrote in a statement. "'My office has found ways to save money while continuing to provide necessary services to the constituents of the Fifth District. As requested when I returned over $160,000 last year, I ask that Speaker Boehner use this money to pay down the national debt.”

Last year Paul returned $500,000 to the Treasury, and said he hoped other members of Congress would follow his cost-cutting lead. In total, Paul's office says they've returned $1.1 million that was unspent from his office's operating budget.

Last week Paul delivered a tea party-sponsored response to President Barack Obama's State of the Union address. He also said on Sunday that he would decide next year on whether he'll run for president in 2016.

Paul, who was elected to the Senate in 2010 with strong tea party support, has already taken steps that signal a presidential bid may be in the cards. He visited Israel in January, agreed to speak at the high-profile Conservative Political Action Conference next month, and even took shots at another potential Republican White House hopeful, Gov. Chris Christie.