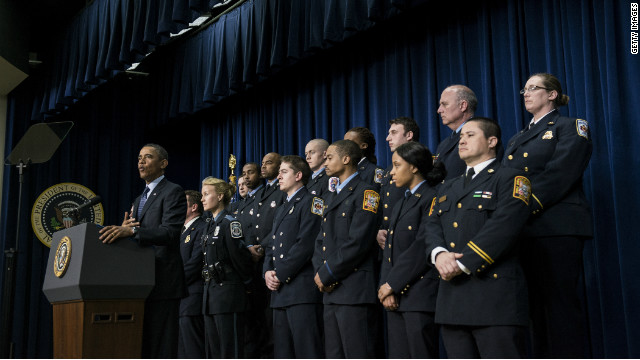 (CNN) - Washington firefighters who stood with President Barack Obama at a public appearance Tuesday are now under investigation by their department.

The firefighters joined the president at a news conference to illustrate the impact forced spending cuts would have on police officers, firefighters and other emergency responders.

The White House sent a request to the International Association of Fire Fighters, said Ed Smith, president of DC Fire Fighters Association Local 36. Firefighters are routinely requested for events such as 9/11 memorial ceremonies and it has "never been a problem," Smith said. "It leads us to question the chief's motives."

In a statement to CNN, DC Fire & EMS Chief Kenneth Ellerbe wrote, "At the request of the Deputy Mayor for Public Safety and Justice, DC FEMS is simply reviewing its internal protocols for such appearances to ensure that both the Department and its employees are fully informed.

"The DC Fire and EMS Department is not considering any disciplinary action against uniformed personnel for appearing alongside President Obama," Ellerbe wrote.

Smith is frustrated by the department's actions.

"I am proud of our members. They represent our city and our country and they shouldn't be under fire," Smith told CNN.

"We fully support the efforts of the President to highlight the essential and life saving work that our first-responders do every single day, and welcome his invitation for our members to participate. We're exceedingly proud of the men and women that wear the DC FEMS uniform, and thank the President for his support," Ellerbe wrote.