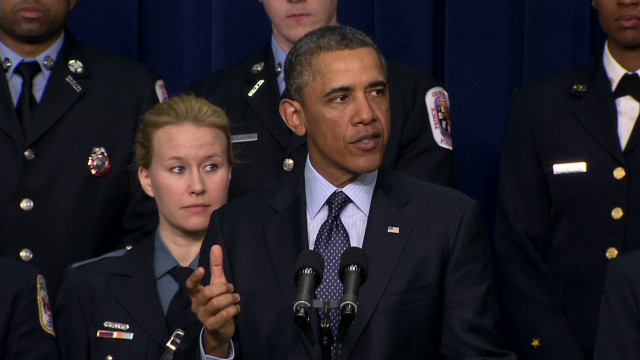 (CNN) - In another plea for congressional action, President Barack Obama on Saturday warned of the pitfalls should a series of automatic, across-the-board spending cuts go into effect late next week.

The president faulted Republicans for not acting and urged lawmakers to avert the crisis by drawing up a deficit-reduction plan that has both spending cuts and revenue.

'It appears that Republicans in Congress have decided that instead of compromising - instead of asking anything of the wealthiest Americans - they would rather let these cuts fall squarely on the middle class," he said.

The cuts, set to kick in March 1, would slash the amount federal agencies can spend by $85 billion over the next seven months and $1.2 trillion over the next decade. The nonpartisan Congressional Budget Office estimates the cuts could reduce economic growth by at least 0.6 percentage points and reduce job growth by 750,000 jobs.

Other ways Americans could feel the impact include weakened unemployment benefits, longer security lines at the airport, furloughs at federal agencies, delays or closures at national parks and higher prices for chicken and other products because of cuts to food safety programs.

The federal pre-kindergarten program, Head Start, also would experience serious cutbacks.
"Once these cuts take effect, thousands of teachers and educators will be laid off, and tens of thousands of parents will have to scramble to find child care for their kids," Obama said.

In order to avert the sequestration, Obama wants to replace the cuts with a mix of more targeted spending cuts and tax increases on top earners.

Republicans say they're ready to make necessary spending cuts, but higher taxes are not on the table. They're also quick to point out that the White House first floated the idea of the cuts more than a year and a half ago.

"The question is: Why won't he work with us? And the answer, quite simply, is because he wants higher taxes," Sen. John Hoeven of North Dakota said in the GOP weekly address Saturday.

The right way to address the issue is not through higher taxes but through "better spending control," he said.

"It's by creating jobs, growing the economy, and expanding the tax base," Hoeven added.

While Congress has been in recess this week, Obama spoke to House Speaker John Boehner and Senate Minority Leader Mitch McConnell on the phone. Details of the conversation were not given out, but little progress seemed to be made this week in terms of preventing the cuts from taking effect.

Obama, however, stressed the urgency of delaying the forced spending cuts, outlining the consequences - as he's done several times this week.

"These are the questions Republicans in Congress need to ask themselves. And I'm hopeful they'll change their minds," he said. "Because the American people have worked too hard for too long to see everything they've built undone by partisan recklessness in Washington."