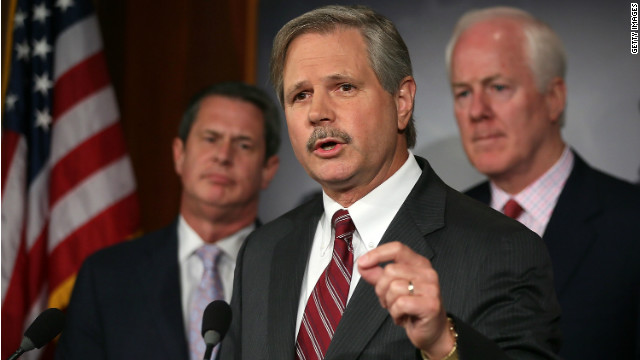 (CNN) - As Washington grapples with how to reduce the nation's deficit, Republicans are again pointing to the Keystone XL pipeline as a project that would boost the economy and ultimately make dents in paying off the federal debt.

Republican Sen. John Hoeven of North Dakota called on President Obama to approve the full transnational pipeline that would bring oil from Canada's tar sands down to the Gulf of Mexico.

"Mr. President, it takes more than a sound bite to get the economy going, but in this case, all it will take is your signature," he said in the Saturday address.

The Obama administration rejected a permit in January 2012 for the northern leg of the pipeline that crosses the U.S.-Canada border. The administration turned down the proposal, saying an alternate route from Nebraska had yet to be decided.

While the entire 1,700 mile pipeline was not approved, Obama in March moved to fast-track the southern portion of the pipeline that runs from Oklahoma to the Gulf.

TransCanada, the company building the pipeline, began construction on that portion in August.

However, Nebraska Gov. Dave Heineman, a Republican, recently approved a new route proposal that would be less damaging to the environment in his state. By signing off on the new route, the governor cleared a big hurdle for the controversial project, but the administration has still not made a decision.

In the weekly address, Hoeven argued the project would create tens of thousands of jobs, help keep down the cost of fuel and reduce dependence on oil from the Middle East.

Opponents of the northern leg say there's too high a risk for potential water and soil contamination from the 500,000 to 700,000 barrels of crude oil that would traverse the pipeline each day. Critics also say the type of oil from the tar sands would release more greenhouse gases than the average transportation fuels sold or distributed in the United States.

Thousands gathered on the National Mall on Sunday to protest climate change and the pipeline.

"Keystone XL is a dirty and dangerous pipeline. It's literally going to cut our country in half, carrying a very dangerous fuel, and it will cause runaway climate change," said Maura Cowley of the Energy Action Coalition.

In his address, Hoeven noted that actress Daryl Hannah and other activists were arrested recently at the White House in a protest against the pipeline.

"The real question then, Mr. President, is: Are you going to respect the will and wisdom of a majority of the American people and approve the Keystone XL pipeline, or are you going to submit to the will of vocal special interest groups? Hollywood activists don't have to worry about energy prices or a weekly paycheck, but working families do," he said.