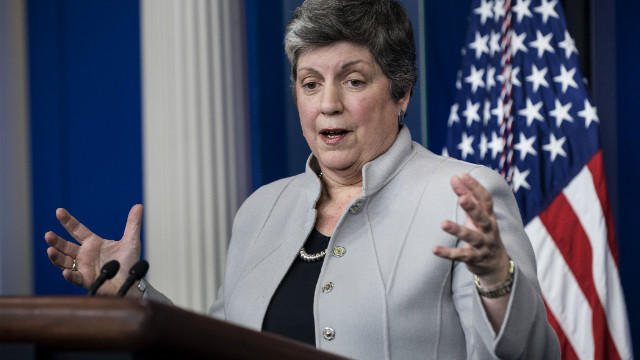 "I don't think we can maintain the same level of security at all places around the country with sequester as without sequester," she said, using Washington verbiage to describe the $85 billion in forced cuts that will take effect starting Friday unless Congress and the White House can agree on a deal to reduce the federal deficit.

The effects on her department will include mandatory furloughs and reductions in overtime pay for border patrol agents, along with staffing cutbacks for airport security personnel. Like Transportation Secretary Ray LaHood on Friday, Napolitano warned of long waits at airports when the cuts begin at the end of the week.

Napolitano couldn't name for sure how much the Department of Homeland Security would be forced to slash from its budgets, saying the number was continually being updated. But she warned the threats the nation faces February 28 won't disappear on March 1.

"Threats from terrorism and the need to respond and recover from national disasters do not diminish because of budget cuts," she said.

Napolitano's appearance Monday continued the White House's effort to lay out in austere terms what the effects of the forced spending cuts will be should they transpire. Neither the administration nor Congressional Republicans have expressed optimism that a deal is imminent on avoiding the cuts.

LaHood, speaking in the same spot as Napolitano, warned Friday of airport delays up to ninety minutes as a result of staffing reductions for air traffic controllers. And on Sunday, the White House released fact sheets for all fifty states and the District of Columbia detailing how the cuts would impact localities.

Jindal and other governors are in Washington for the winter meeting of the National Governors Association.

"I'm not here to scare people," she said. "I'm here to inform and also to let people begin to plan, because they're going to see these impacts in their daily lives and they're going to have to adjust and make their arrangements accordingly."