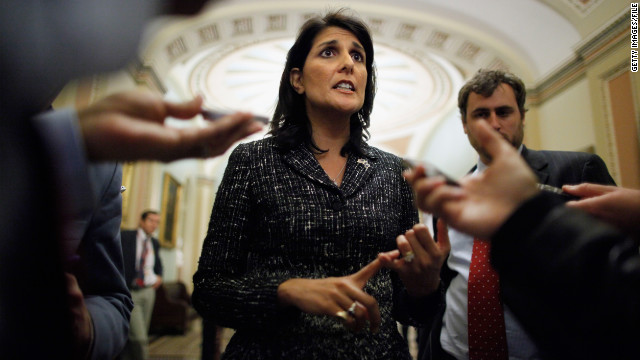 (CNN) - Republican Gov. Nikki Haley of South Carolina blew off some steam Monday, criticizing lawmakers in Washington for letting partisan bickering get in the way of balancing the budget.

"I could not be more frustrated than I am right now. How many more times are the governors going to have to pick up the mess of Washington DC?" she said at a press conference in the nation's capital for the Republican Governors Association.

She continued: "How many more times are we going to have to deal with these issues over and over again because of the finger pointing and the blame game that keeps on happening in Washington? What I will tell you is – we heard today a whole lot of 'no.' And that seems to be the new word in DC is 'no' from everybody."

Her comments came days before $85 billion in automatic, across-the-board spending cuts over the next seven months are scheduled to begin if Congress doesn't come up with a deficit-reduction plan. Lawmakers have known the cuts were coming since the summer of 2011 but have yet to pass a bill to avoid them.

While Congress is back in session Monday–after taking a weeklong recess–there's little indication that lawmakers will strike a deal by Friday's deadline.

Haley didn't appear to single out one party over the other. Rather the first-term governor faulted the president and members of Congress for not wanting to put in the effort.

"Something's wrong. My kids could go and find $83 billion out of a $4 trillion budget. This is not rocket science. What this is is an inability to want to get to work," she said.

"What they need to do is do what these governors do everyday," she continued. "We stay until we get it done."

She further added that the federal government has grown too big and had too large of a role in peoples' lives.

"Has there ever been more of a time where government was more intrusive than it is today? And to the point that it is really psychotic," she said. "There is something very wrong in this town."

Haley and other state executives are in town for the National Governors Association annual winter meeting. The select group heard from President Barack Obama Monday morning at the White House, where he urged governors to put pressure on Congress to avert the upcoming fiscal slashing.

Like Haley, Gov. Bobby Jindal argued that Washington lacked leadership and more specifically targeted the president. While the Louisiana Republican and potential 2016 presidential contender argued for more cuts, he took issue with the across-the-board approach, saying there was a smarter, better way to make reductions.

He said the administration was exaggerating the impact of the cuts and called on Obama to stop "scaring" the public into thinking a doomsday scenario was near.

"I think it's time for the president to show leadership," Jindal said. "The reality is he's been engaged in almost non-stop campaigning trying to scare the American people, trying to scare now states and others."

The White House released Sunday night a detailed analysis of the potential impact of the cuts, and the president issued dire warnings himself Monday when he spoke before the NGA.

"These impacts will not all be felt on Day One but rest assured, the uncertainty is already having an effect," the president said. "Companies are preparing lay off notices. Families are preparing to cut back on expenses and the longer these cuts are in place, the bigger the impact will become."

The president has largely placed blame on Republicans for refusing to allow new revenue on the table as part of a deficit-reduction deal. Republicans, in turn, say tax increases would only cripple the economy, not boost it. Real change, they argue, will only come through spending cuts on inefficiencies in Washington.

Democratic governors also voiced their opinions Monday, urging Congress to gather in a bipartisan fashion to prevent the forced spending cuts that are expected to kill $750,000 and hurt economic growth.

"Really what we're saying is let's just get the job done," Gov. Dan Malloy of Connecticut said. "That's what we're paying you for. That's what you're here for. Work with the president. Find a way to get it done. Or, if you want, just turn us over, turn it over to us governors and we'll negotiate it."

Danny Kanner, a spokesman from the Democratic Governors Association said the comments at the RGA press conference are just "all talk."

"(Republican governors) refuse to urge Congressional Republicans to embrace a balanced approach or end special tax breaks for the wealthiest Americans in order to stop job-killing automatic spending cuts, demonstrating that they have no interest in a bipartisan agreement," Kanner said in a statement. "Clearly, they're part of the problem, not the solution."