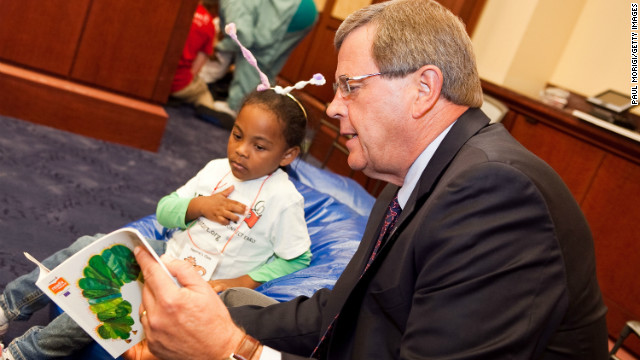 (CNN) - One of the two Republican congressmen considering a 2014 bid for an open U.S. Senate seat in Iowa says he is staying put in the House.

Rep. Tom Latham announced Wednesday that he will not campaign for the seat of longtime Democratic Sen. Tom Harkin, who late last month announced that he wouldn't run in 2014 for a sixth term in office.

In an email to supporters, Latham acknowledged that he was interested in making a bid, saying "The opportunity to serve Iowa in the U.S. Senate is appealing to this farm kid who grew up here, raised a family here, and helped grow a family business in Iowa. I love Iowa."

But Latham went on to say that "I cannot in good conscience launch a two-year statewide campaign that will detract from the commitment I made to the people who elected me, at a time when our nation desperately needs less campaigning and more leadership."

Latham's announcement means that Rep. Steve King may have a clear shot at the Senate nomination in Iowa. King, a conservative congressman known for his vocal criticism of President Barack Obama, is seriously considering a bid. King has been criticized by some establishment Republicans as possibly being too controversial and outspoken to win a statewide general election.

"A potential Senate race remains an analytical decision first and then one that requires deep conviction. Such a decision includes, of course, my family and the best interests of Iowans and Americans. It is too big a decision to be rushed," said King in a statement, following the Latham announcement.

Democratic Rep. Bruce Braley announced earlier this month that he would run for the seat. U.S. Agriculture Secretary Tom Vilsack, a former two term Iowa governor, recently said he will not seek the seat. His name was floated as a potential Democratic candidate. Vilsack's wife Christine, however, has also come up as a potential candidate. Last year she lost to King in a well-publicized House race.

The race for Harkin's seat will most likely be one of the most heavily contested contests in 2014, as the Democrats try to hold onto their majority in the Senate. The party currently has a 55 – 45 seat advantage over the GOP in the chamber (including two independents who caucus with them). But the Democrats will be defending 21 of the 35 seats up for grabs in November 2014.

The Democratic Senatorial Campaign Committee was quick to weigh in on the Latham news.

"This is yet another potential candidate in a long line of Republicans who have decided not to face down the extremist elements within their own party. Regardless of who runs on the Republican ticket, we are focused on supporting our great Democratic candidate, Bruce Braley. Bruce has repeatedly proven himself to be a fighter for middle class families and someone who will always put Iowa first.," said DSCC Executive Director Guy Cecil.

A Republican official, who asked to remain anonymous to speak more freely, told CNN that "the DSCC was hoping for a long and ugly primary and they lost that."

The other senator from Iowa, Chuck Grassley, is a Republican.