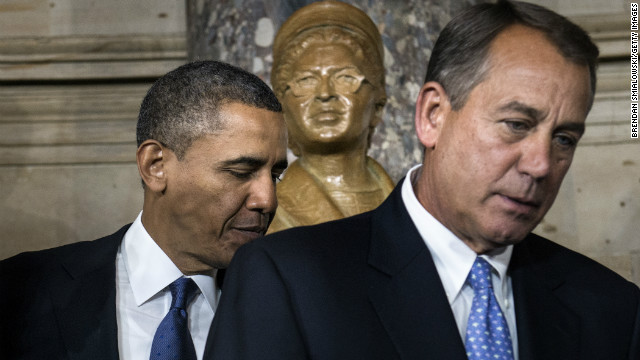 Washington (CNN) - As the deadline for forced federal spending cuts closes fast, new polling indicates that as of now President Barack Obama has the upper hand over congressional Republicans in the political battle over where blame will fall if the cuts are triggered.

But the surveys also suggest that while the president might be winning the spending argument right now, his poll numbers on the issue are nothing to brag about.

According to an ABC News/Washington Post poll released Wednesday morning, two-thirds of the public disapprove of how congressional Republicans are handling the issue of federal spending, with only 26% giving them a thumbs-up.

A slight majority (52%) also disapprove of how Obama is handling the issue but his 43% approval rating on federal spending is 17 points higher than that of congressional Republicans.

And if no deal is reached by Friday and the forced spending cuts, known inside the Beltway as the sequester, start taking affect this weekend, more fingers will be pointed at GOP lawmakers. Forty-five percent of those questioned in a Pew Research Center/Washington Post survey released earlier this week said congressional Republicans should take more blame, with 32% saying they'd place more blame with the president, and 13% saying both sides should be blamed equally.

Here's another way to illustrate the point: An NBC News/Wall Street Journal poll from Tuesday indicates that Americans are divided over whether Obama is emphasizing unifying the country or taking a partisan approach. But by a 3-1 margin, they say that congressional Republicans are putting partisanship over unity, according to the survey.

"It looks like this could turn into a "lose-lose" scenario for both sides, although the Republicans appear to have more to lose than Obama," CNN Polling Director Keating Holland said. "It's likely that the GOP will get most of the blame if the forced spending cuts actually take effect, but there's a lot of blame to go around, and if a majority disapprove of how Obama is handling this issue, it's unlikely he will escape any blowback from the sequester."

While Democrats are overwhelmingly united in their support of how the president's handling the federal spending, the ABC/Washington Post poll indicates that Republicans are divided (44%-51%) on how GOP lawmakers are dealing with the issue.