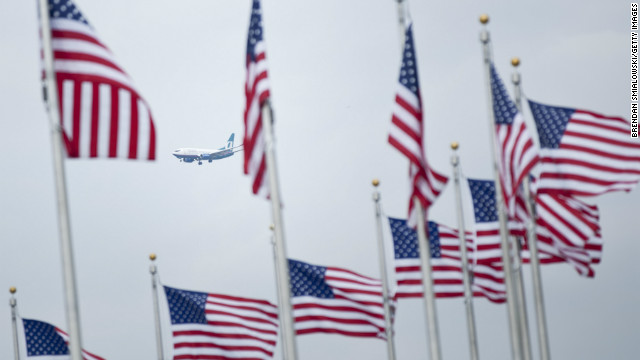 The prohibition could ground some official congressional delegation trips – known as CODELs – where several members or a committee travel on fact-finding or relationship-building trips to foreign countries. Transportation for these trips is sometimes provided by military aircraft, while sometimes members travel by commercial air. It was not immediately clear if the restriction would cancel any planned trips.

An aide told CNN of Boehner's remarks to the closed-door meeting.

Boehner is typically permitted to travel to and from his home district by military aircraft, but he regularly travels commercially.

And it is not clear whether the executive branch will make any modifications to how it uses military aircraft.

Also, the Pentagon is beefing up the rules governing the use of military aircraft by members of Congress, according to a senior Pentagon official. The official said there will be both new rules and stronger enforcement of existing rules and policies in the face of the mandatory spending cuts expected to begin on Friday, and the lack of certainty about future funds.

Travel to visit troops and commanders in overseas locations such as Afghanistan and South Korea will receive priority. Members will no longer be able to travel to their home states on military flights even if they are visiting military bases, the official said. While this generally was not permitted, the officially acknowledged there are cases where it happened.

In addition travel by congressional spouses will only be permitted for official travel, and if it does not result in greater costs, such as additional aircraft.

The official declined to be identified because an official announcement has not yet been made. The Pentagon is aware of Speaker John Boehner's decision suspending military travel for all House members, but the Pentagon rules are intended to govern all congressional travel which would include that by staff and family.

Additionally, Vice President Joe Biden is set to travel to Selma, Alabama on Sunday – a trip he would typically make using a plane from a fleet specially outfitted by the Air Force for executive use, with him aboard any of the planes are known as Air Force Two. The White House said he will participate in a crossing of the Edmond Pettus Bridge, where civil rights demonstrators attempted to cross in March of 1965 but were beaten back by police.

The Air Force also provides President Barack Obama with planes as he travels, by Air Force One and a helicopter known as Marine One. Air Force planes are also used to shuttle security personnel, helicopters and motorcade vehicles to presidential visit locations.

Federal officials have warned air travel will be complicated for the general public after the spending cuts, known in Washington as the sequester, take effect.

"Air traffic controllers and airport security will see cutbacks, and that could cause delays at airports across the country," Obama said at an event in Virginia on Tuesday highlighting the impact of the forced budget cuts.