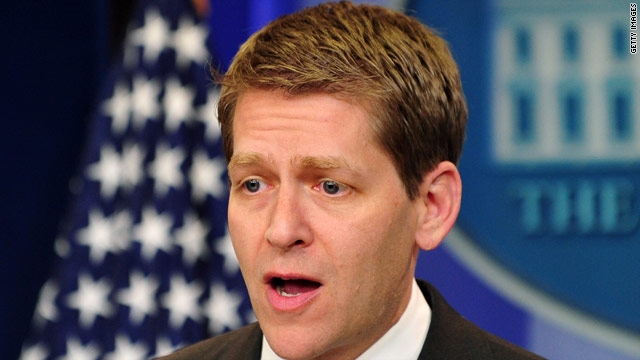 (CNN) - Neither the White House nor the Homeland Security Department headquarters were made aware of the Immigration Customs and Enforcement decision to release detainees ahead of the pending forced spending cuts, an administration official said Wednesday.

Separately, at a press briefing, White House Press Secretary Jay Carney said the decision was made by ICE "without any input from the White House."

"The agency released these low-risk, non-criminal detainees under a less-expensive form of monitoring to ensure detention levels stayed within ICE's overall budget," he said.

The agency announced Tuesday that it was releasing "several hundred" people out of detention facilities to other "less costly" forms of supervision because of the automatic across-the-board spending reductions set to begin Friday.

Gillian Christensen, a customs enforcement spokeswoman, said the cases were reviewed over the past week as part of agency preparations for the government-wide cuts, set to total $85 billion in the next seven months.

"As fiscal uncertainty remains over the continuing resolution and possible sequestration, ICE has reviewed its detained population to ensure detention levels stay within ICE's current budget," she said in a statement.

"All of these individuals remain in removal proceedings. Priority for detention remains on serious criminal offenders and other individuals who pose a significant threat to public safety," she added.

That move prompted an incredulous reaction from House Speaker John Boehner, who said on CBS the release of detainees was "outrageous."

"This is very hard for me to believe, that they can't find cuts elsewhere in their agency," Boehner said, adding: "I'm looking for more facts but I can't believe that they can't find the kind of savings they need out of that department short of letting criminals go free."

Arizona Gov. Jan Brewer, Republican and sharp critic of many Obama administration immigration actions, said in an interview on Fox News that the release is "unexplainable" and "unbelievable."

Republican leaders have criticized Obama administration warnings as scare tactics, but also said the cuts would be bad policy and should be changed. Only rigid fiscal conservatives have backed the concept of mandatory deep spending cuts as a painful first step of deficit reduction.

The immigration service also denied that the Homeland Security official responsible for immigration enforcement had stepped down from his post over the situation, calling one report "inaccurate and misleading."

That official, ICE spokeswoman Christensen said in a statement, "announced several weeks ago to ICE senior leadership that he planned to retire after 40 years in federal service and 6 years at ICE. As planned, and as shared with ICE staff weeks ago, Mr. Mead will retire at the end of April."