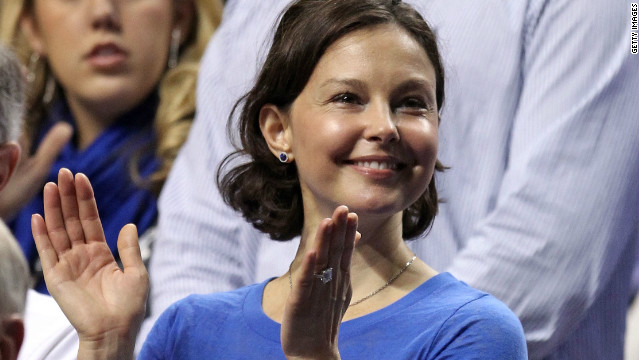 Judd: 'Is there an elephant in the room?'

(CNN) – Ashley Judd was fully aware she was under the Washington media spotlight Friday when she spoke about public health issues at George Washington University.

"I'm a lot more nervous than y'all are, I promise," she told a group of students who were asking questions at the event. "There are people here who don't give a rat's-you-know-what about public health."

It wasn't the first time Judd looked over at the reporters in the room. Earlier in her remarks, Judd talked about how she learned to train herself to bring her "anxiety down" at certain points in her life.

Then, turning to the press, she joked: "You people have that effect on us. You do. You do," she said, drawing laughs from the crowd.

Normally, a celebrity appearance at a university in Washington wouldn't turn out such a big media presence. But this was the first time Judd was speaking publicly since she began stoking speculation about challenging the Senate's most powerful Republican in 2014.

Judd has expressed interest in the Kentucky seat currently held by GOP Sen. Mitch McConnell. She recently met with potential donors in Kentucky, and talked with top officials at the Democratic Senatorial Campaign Committee. She reportedly will announce her decision by early May, around the time of the Kentucky Derby.

Critics–and even McConnell's team–have preemptively been on the attack, especially with questions about her residency.

While Judd's family dates back generations in Kentucky and she spent much of her childhood in the state, she's lived in Tennessee for years and represented Kentucky's neighboring state when she attended and spoke at the 2012 Democratic National Convention.

Media outlets were permitted to attend the event Friday but were told beforehand that only students were allowed to ask questions. None of the students at the event, however, attempted to quiz Judd about her potential Senate run, though one student dipped her toe in the water.

"I know you may be running for political office, but I'm not asking you about that," the student said.

Keeping her poker face, Judd simply smiled and brushed it off with sarcasm. "Is there an elephant in the room?"

What was abundantly clear was Judd's repeated references to Kentucky. She made sure to mention she graduated from the University of Kentucky at least a couple of times and seemed to talk about the state at every chance she could. As she was gifted a vase at the end of session, the state got another shout-out.

"The daffodils are fixing to bloom in Kentucky, and they will look beautiful in this," she said.

Judd spoke for more than an hour at the event–first giving a speech about her background and how she became interested in public health and other humanitarian issues. The Harvard grad spoke about her travels and people she met at orphanages, brothels, slave labor camps and displacement camps.

She also spoke freely about her violent past as a three-time victim of rape and spoke knowledgeably about gender violence issues, both in the military and civilian worlds.

Judd also opened up about her family, frequently talking about her mother, country singer Naomi Judd, who was in the audience and was the first to give her a standing ovation at the end.

The Hollywood actress also expressed her love for both Peace Corps volunteers and epidemiologists.

"Yay epidemiologists yay!" she said at one point, meeting an audience member who specialized in the field.

Some of her not-so-politician-sounding moments didn't go unnoticed by her would-be competition. Brad Dayspring, a strategist at the National Republican Senatorial Committee, jumped on a comment Judd made about how she once told the musician, Bono, that she and her ex-husband would travel during the winters.

"We winter in Scotland," she said. "We're smart like that."

Dayspring wasted no time: "A true woman of the people," he posted on Twitter, referring to her comment.

"I wonder if Ashley Judd will 'winter in Scotland' this year," he also wrote. "Tough to run a #KYSEN campaign from the UK."

Asked about Judd's potential campaign on Friday, McConnell didn't give too much input.

“We’ll talk about next year’s race when it gets here," McConnell told CNN affiliate WAVE in Kentucky.

Judd will be out in the spotlight again Saturday, as she's scheduled to receive an award for her humanitarian work in India.

Besides her residency, another issue that could hurt Judd in Kentucky is her fierce opposition to mountain top coal mining, a big industry in the state. And that's got some Kentucky Democrats concerned about the prospect of Judd as their party's 2014 Senate nominee. No other major Democrats are considering bids at this time.

But Judd does have the support of one of the top elected Democrats in the state.

"She's smart. She knows the issues, and she does it in a very pleasant way, she talks about them in a very unthreatening way. So I think she'd be a great candidate," Rep. John Yarmuth said last week.