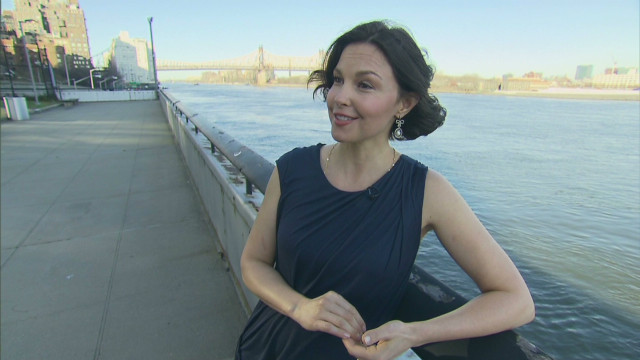 Washington (CNN) - Ashley Judd is coming to Washington to headline two public events, and that's fueling speculation that the activist actress may launch a bid for the U.S. Senate.

Friday Judd will be in front of cameras as she's the featured speaker at a forum on women's reproductive rights at George Washington University's School of Public Health. Judd is expected to take questions from the audience after finishes her comments. Saturday she is scheduled to receive an award for her humanitarian work in India.

While she's not expected to discuss her possible bid to launch a Democratic challenge to Senate Minority Leader Mitch McConnell of Kentucky, her events in the nation's capital will put her under the glare of the national political spotlight. McConnell, the top Republican in the Senate, is running next year for a sixth term in office.

Judd recently met with potential donors in Kentucky, and talked with top officials at the Democratic Senatorial Campaign Committee. She reportedly will announce her decision by early May, around the time of the Kentucky Derby.

Judd's family dates back generations in Kentucky. While she spent much of her childhood in the state and graduated from the University of Kentucky, she's lived in Tennessee for years and represented Kentucky's neighboring state when she attended and spoke the 2012 Democratic National Convention.

McConnell's re-election campaign went up recently with an online ad that highlights the fact that Judd doesn't live in Kentucky. And earlier this year American Crossroads, the conservative super PAC co-founded by Karl Rove, spent $10,000 on a web ad earlier that also hit Judd for her declared love of Tennessee.

Judd actively campaigned for President Barack Obama during the 2008 and 2012 elections and has been known for advocating for poverty reduction, immigration rights, environmental issues, public health, and human rights issues. She also graduated from the Kennedy School of Government at Harvard University with a master's degree in 2010.

Judd's event Friday on women's reproductive rights comes just a week after Planned Parenthood went up with an ad that criticized McConnell's stance on birth control, spotlighting his joining with 10 other GOP lawmakers to support a lawsuit by a company that seeks to avoid mandatory health coverage of birth control pills in its employee health coverage.

Besides her residency, another issue that could hurt Judd in Kentucky is her fierce opposition to mountain top coal mining, a big industry in the state. And that's got some Kentucky Democrats concerned about the prospect of Judd as their party's 2014 Senate nominee. No other major Democrats are considering bids at this time.

But Judd does have the support of one of the top elected Democrats in the state.

"She's smart. She knows the issues, and she does it in a very pleasant way, she talks about them in a very unthreatening way. So I think she'd be a great candidate," Rep. John Yarmuth said last week.