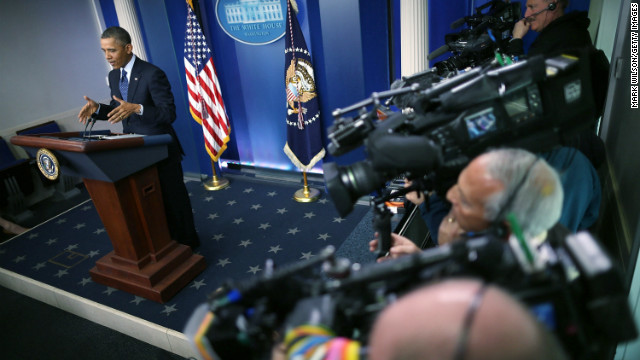 Debate ensues on day one of forced spending cuts

Washington (CNN) – They argued over the forced spending cuts known as sequestration before those cuts took effect, and on the first full day of the cuts being official, Congress and the White House are still bickering over who is to blame.

“It’s happening because Republicans in Congress chose this outcome over closing a single wasteful tax loophole that helps reduce the deficit,” President Barack Obama said in his weekly address on Saturday.

Rep. Cathy McMorris Rodgers, a Republican from Washington state, countered, “This week, the president traveled 180 miles to Newport News, Virginia, instead of traveling one and a half miles to Senator Harry Reid’s office on Capitol Hill to negotiate a replacement of smarter spending cuts.”

Obama signed an order enacting the cuts Friday evening as required by law, triggering $85 million in cuts to federal spending this year as part of a larger $1.2 trillion in cuts over the next decade.

Officials have said that amounts to 9% in cuts to defense programs and 13% cuts to nondefense spending.

The law requires the cuts to hit nearly every account – meaning, as the Obama administration has argued, that an agency head can’t spare the budget for payroll by gutting the budget for uniforms, for example.

Obama described the cuts as “dumb, arbitrary” on Friday, and in his Saturday address he explained some of the ways the effects will be felt as they ripple across the economy.

“Beginning this week, businesses that work with the military will have to lay folks off,” Obama said. “Communities near military bases will take a serious blow. Hundreds of thousands of Americans who serve their country – Border Patrol agents, FBI agents, civilians who work for the Defense Department – will see their wages cut and their hours reduced.”

He acknowledged “not everyone will feel the pain of these cuts right away,” and the cuts aren’t expected to deal a fatal blow to the economy. But the cuts will be real and felt in paychecks around the country, he said.

Obama met in the White House on Friday with congressional leaders of both parties, though that meeting came too late to reach a deal to avoid the cuts. But lawmakers could take action in the coming weeks to pay down the cuts in other ways.

“I still believe we can and must replace these cuts with a balanced approach – one that combines smart spending cuts with entitlement reform and changes to our tax code that make it more fair for families and businesses without raising anyone’s tax rates,” he said. “That’s how we can reduce our deficit without laying off workers, or forcing parents and students to pay the price.”

But Republicans oppose that route.

“We can’t let Washington continue spending money it doesn’t have, especially when it’s taking that money straight from your wallets,” McMorris Rodgers said. “The problem here isn’t a lack of taxes. ... Spending is the problem, which means cutting spending is the solution. It’s that simple.”

House Republicans have put forward plans with targeted cuts, as opposed to the broad cuts of the sequester. Some have compared the difference to a scalpel and meat cleaver.

“In the last year, the House of Representatives has passed two proposals to replace the president’s sequester with smarter spending cuts. Our plans cut government waste and make long-term reforms that put us on a path to a balanced budget,” McMorris Rodgers said. “In addition, we are looking at ways to close tax loopholes and clean up our tax code so we can lower rates and help create jobs. These ideas get government out of the way so we can bring jobs home and preserve the American Dream.”

Regardless of their rhetoric, the cuts are taking effect and no deal appears to be on the horizon to enact cuts more palatable to both sides of the aisle.