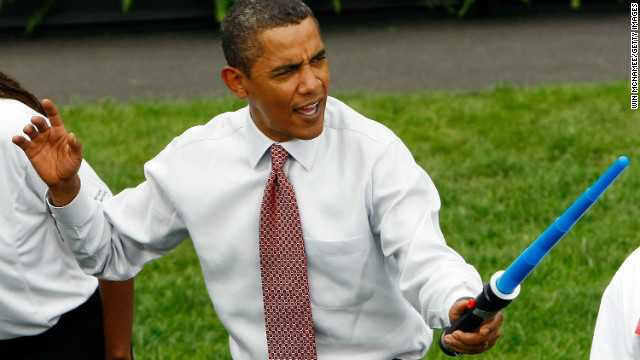 (CNN) -– One person described it as the “ultimate nerd sin.” Others didn’t think it’s so bad. But President Barack Obama took heat online for tangling the Jedi mind trick with the Vulcan mind meld.

Obama said Friday he didn't have the power to "somehow do a Jedi mind meld with these folks and convince them to do what's right" on reaching a deal to avert the forced budget cuts known in Washington as the sequester. The comment came in response to a question from CNN chief White House correspondent Jessica Yellin after the president met with top congressional leaders from both parties.

Perhaps because he touched a nerd nerve – or maybe because Jedis are far more interesting than debating government spending – the comments sparked a storm of reaction from “Star Trek” stars, fans of both films and a keenly interested online community.

George Takei, who played Mr. Sulu on “Star Trek,” initially posted this quip to Facebook: “A ‘Jedi mind meld’ Mr. President? Really? One more like that and I will Spock you like a hurricane.”

He later took that post down and came to Obama’s defense in an interview on MSNBC.

“Jedis are the guardians of peace and justice and ‘mind meld’ is the Vulcan way of having the force of pure, clean communication between one mind and the other,” he explained. “Well, that’s what the president is trying to do – bring those two forces together. And with that kind of guardianship of peace and harmony and justice, and bringing powerful minds together and communicating purely, you can find the rational answer, and that’s finding common ground, and that’s what they’ve got to do.”

Takei isn’t a nonpartisan watcher, though. He described Republicans as “comparable to Klingons to deal with,” invoking the ruthless warriors in “Star Trek.”

One of his fellow stars weighed in on Friday. Leonard Nimoy, who played Spock in “Star Trek,” wrote on Twitter in a comment that was retweeted over 2,600 times:

Only a Vulcan mind meld will help with this congress. LLAP

On Friday, the online comments ranged from shock that the president would reference the films to calls for his impeachment to those who came to his defense. After all,

JEEZ. So Obama said "Jedi mind meld" instead of "Vulcan." If YOU ran the free world, you wouldn't have time to sort Romulans from Ithorians.

And some wondered if he could muster the forces to reach a deal between the two parties, which had so far been elusive:

If only Obama could use the same special powers he has to make #jedi a trending topic on twitter to persuade Congress.. #lessonsfromJohnson

But the issue didn’t live only in social media.

Chris Peterson, a research assistant and Web communications specialist at the Massachusetts Institute of Technology, wrote in a blog post, “I now reluctantly but firmly step forward in defense of my President against these reckless and ill-founded accusations.”

After documenting a way of connecting minds known as the Jedi meld in “Star Wars” fiction, Peterson wrote that “Jedi mind meld … was the right reference for Obama to make” because neither the “Star Wars” or “Star Trek” reference alone “fully captures what Obama was suggesting.”

Obama has his own “Wars” and “Trek” credibility. He’s invited actress Nichelle Nichols - the actress who played Lt. Uhura - to the White House, where he demonstrated the Vulcan salute.

Here's a photo of Nichelle in the Oval Office meeting w/ Pres Obama last year – a wonderful memory to be sure! http://t.co/NUHNypih

He wielded a light saber when sparring with Olympic fencer Tim Morehouse in 2009.

The president also said in a 2011 speech at Northern Michigan University after viewing technology teachers’ use to teach classes online, "I felt like the guy in ‘Star Trek.’ I was being beamed around across the Upper Peninsula."

And the White House fights back against the criticism with this tweet:

We must bring balance to the Force. #Sequester #JediMindMeld pic.twitter.com/lIZlgavhuR

The Web address links to his plan to avert the cuts.

But for those who aren’t satisfied, there’s a petition on the White House website:

“We the people of the United States of America, and Star Wars and Star Trek fans the world over respectfully request that President Obama or a representative of his Administration Apologize for his mash-up of the two cannons when on March 1st 2013 when giving a speech addressing the Sequester said "Jedi mind-meld" when giving an answer,” it reads. “We understand the stress the Job of President of the United-States can put on an individual and we understand press conferences are difficult to give. However this is extremely important and warrants clarification on if he intended to say Vulcan Mind Meld or Jedi Mind trick as we must know which he is truly a fan of.”

So far, it has only 37 signatures.