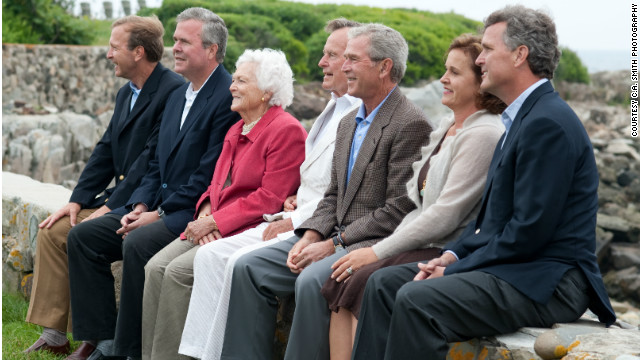 Washington (CNN) – After leaving office, President George H.W. Bush certainly had opinions about the challenges facing the nation and the politics that affected the public's perception of the White House. As a father, Bush kept his thoughts in check even when he believed the attacks were overtly personal and painted his son, President George W. Bush, in a wrong light.

"I am really down about the way the President has been attacked," Bush writes in a 2005 letter to journalist and long-time friend Hugh Sidey about the criticism directed at his son for the government's response to Hurricane Katrina. "Over and over again the networks attack him. First for being late in moving. Then for over flying Louisiana on the way back to Washington. Then on the snail like pace of relief."

Bush went on to say "My heart went out to him. Here is a guy who cares deeply. Who wants every possible resource of the Federal Government brought in to bear to help people, yet he is being roundly accused of not giving a damn...the critics do not know what is in 43's heart, how deeply he feels about the hurt, the anguish, the losses affecting so many people, most of them poor."

The elder Bush, a decorated Navy pilot, ended this letter saying he had been shot down 61 years ago that very day by the Japanese.

"Now I see some of his most nasty critics trying to shoot down my beloved son – shoot him down by mean spirited attacks," Bush wrote. "I was a scared kid back then. Now I am just an angry old man hurting for my son."

These newly revealed observations by the 41st president about his son the 43rd president, are outlined in an updated book "All the Best, George Bush; My Life in Letters and Other Writings," set for release on Tuesday. CNN was provided an advance copy of the book by the publisher Scribner.

Like any proud father, the elder Bush explained in another letter to former Canadian Prime Minister Brian Mulroney that when his son accepted the Republican presidential nomination in 2000, he felt as if the "baton had indeed been passed."

"When George finished his acceptance speech, it was like a new day had dawned on our family," the father wrote in the Aug. 5, 2000 letter. "I felt that finally my political days were over – the record sealed and finished, with the historians left to decide. The baton had indeed been passed; and when Bar (Barbara) and I left the hall, proudest parents in the world, we felt that a wonderful chapter was closed, finished!"

The night before the 2000 election, the father sent an e-mail to his son Jeb, who was then-governor of Florida, praising him for working tirelessly to help his brother in the presidential campaign.

"I just want you to know that your mother and I have never been prouder of you," the elder Bush said. "I don't know what will happen in Florida tomorrow. But I do know no one could have done more than you to help George carry the state, and to help in other states as well..." He went on to say, "I hope God will bless us with victory in Florida and across the land; but whatever happens our family will be strong and solid and your brother George and your Dad will say Jeb gave it his all and we love that guy. Devotedly, DAD."

It was Florida that indeed did hand George W. the presidency – a White House contest that was won by a mere 537 votes. During the recount of the Florida votes, the elder Bush wrote that he often spoke to his son, George W., about the situation.

"I have had more phone conversations over the last month with George than one could imagine," the father wrote.

After the Supreme Court ruled in December of 2000 and it was determined that George W. had beaten Al Gore, the father wrote, "The fat lady sang. The ordeal ended," in a letter to Sidey.

"And now a huge chapter in the lives of the Bush family opens up," the elder Bush said, who then praised Gore's concession speech, calling it "absolute perfection."

Bush told Sidey he called the White House and asked to be connected to Gore and within a few minutes the vice president called him back.

"I congratulated him, just a sentence or two, just a few words," the elder Bush wrote to Sidey. "I suddenly felt for him, saw him as a man whose disappointment had to be overpowering. I knew he must be hurting. He was very gracious. The conversation was over in a flash, but I suddenly felt quite different about Al Gore. The anger was gone, the competitive juices stopped flowing. I thought back to my own feelings of years before when I lost, when I had to go out and accept my defeat. He did it better than I did, and his ordeal had to be tougher because the election was so close. True I had to actually give up the Presidency that he was now seeking, but still he had been in public life a long time and he and his family were shattered."

After his son George W. addressed the nation that night from Austin, he recounted how he spoke to him by telephone. "What did you think Dad?" the president-elect asked his father. "I told him how perfect I felt his speech was. I also told him I had lost it."

In a Jan. 21, 2001 letter to Sidey – the day after his son had been sworn in as president – the father talked about how emotional the inauguration had been for him.

"Our son was President of the United States of America," Bush wrote. "It was for real. Our pride knew no bounds. We managed to contain our emotions but they shook us to the core. Wonder. Joy. Amazement. Honor. Happiness. I don't know how to describe what I felt, but it was good, real good."

The elder Bush also said, "I am not sure if there was one specific moment in time when I finally realized that my son was President. If I had to single out one such moment it would be right after the oath taking."

In the same letter, he recounted how some people would ask him what he should be called and he responded, "I like #41. Adjusting will take time but it will not be difficult at all. It is funny after all these years to have to get a new name; but, hey, what does it matter if your boy is President of the United States of America so help me God."

The elder Bush also told Sidey he spoke to his son right after the Sept. 11th terrorist attacks. "I talked to George," Bush wrote. "I did tell him the sooner he got back to Washington the better. He totally agreed with that."

And the elder Bush noted that he found it difficult in not joining Bill Clinton and Gerald Ford in making statements about the attacks, but realized it was better to stay out of the spotlight.

"It is not easy, dear friend, to sit on the sidelines now, not easy to make decisions or take actions," Bush wrote. "But I must continue to stay out of the limelight, out of the news, giving quiet support to #43."

The book, which recounted his early years, his family and his presidency through letters and other communications he wrote, was first released in 1999 and basically was his autobiography since he never wrote one. As he did in the original book, readers often will see how emotional the former president became at times.

One such moment came after Iraqi leader Saddam Hussein fell after the second Gulf War in April of 2003.

In an e-mail to his son, the elder Bush recalled comments he made to friends saying, "I shamefully choked up, the tears tumbling down my aging cheeks. I was embarrassed; but then I realized that I shouldn't worry if people see this visible manifestation of a father's concern, a father's love. It was pride, yes, but it was also an overflowing of joy from all that you have given your mother and me over the years..."

Bush continued, "...Bar (Barbara) and I are at your side. I hope you can feel it. We will stay out of the way, but I am there beside you, my heart overflowing with happiness on this day of vindication."

When his son was seeking re-election in 2004, the elder Bush said he was hungry for any information about the race and received a briefing the day before the election from his chief of staff.

"Though 43 was still leading by a thin smidgeon in many of the states, some of the important ones had slipped into a tie or into a small negative," Bush wrote in a letter to Sidey. "This, of course, caused by aching duodenum to throb, to pulsate, to hurt."

And the elder Bush recounted how he was watching television news the previous Sunday, and heard some political pundits call his son a "liar."

"The whole atmosphere is horrible and for this loving Dad it is impossible," the father wrote. "I cannot run away and hide."

He recounted that he was a "nervous wreck" on Election Day. "I feel like I have been hit squarely in the gut – hard," the elder Bush wrote.

The day after the younger Bush won re-election he told Sidey his son "…asked me to come over to the Oval Office. I threw on my clothes and went over there. The two of us sat alone in that historic office. For me it was magic."

Later the father recounted how he stood with his son on the White House putting green.

"To myself, I was saying, 'I wish I could help this son of ours. I wish I could do something to help ease the burden, a burden incidentally that he never ever complains about. But I cannot. I am an old guy. My experiences are out of date. Perhaps my instincts aren't as good as I once thought they were,'" the elder Bush said. "George W. said to me, 'Dad, do you realize that this is the first time since 1988 that a President has won with a clear majority of the vote?' My mind raced back to my win over (Democratic nominee Michael) Dukakis in 1988. Who would have thought back then that I would be bonding with my own son in that manner?"

The elder Bush ended the letter by writing, "Victory. How sweet it is."