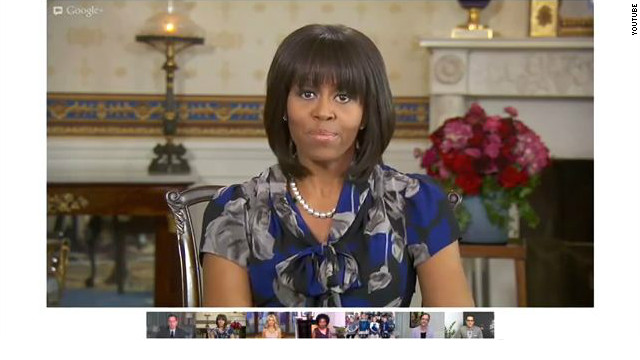 "The first thing that we want to make sure that we do is not make this an issue about looks," Obama said Monday in her first Google+ Hangout.

For the third year in a row, the first lady is pushing her "Let's Move" campaign against childhood obesity. The initiative has taken her on the road in recent days, stopping by for some now-viral "mom dancing" on Jimmy Fallon's late-night comedy show, and holding events in Illinois, Mississippi and Missouri. She also taped two public service announcements with one of Sesame Street's biggest stars, Big Bird.

Speaking to one of the Google participants–who said he lost 200 pounds down from 400–in the session, Obama addressed ways to teach kids how to combat weight loss without thinking about weight.

"We should really talk to kids about how they feel, how they feel inside so that we are not just dealing with the physical manifestations of the challenge but we are really tapping into what is going on inside that head of that child," she said. "And then we want to talk about ways to make it fun."

When her own daughters were going through "some of these similar challenges" when they were little, Obama said she "never talked about weight in the household."

"We just started to make changes. And we made changes in a way that didn't make them feel badly about themselves," she said. "It didn't even make them feel any ownership over it because truly kids that age can't control what they eat."

Participants also quizzed Obama on more personal topics, such as whether she still plays the piano (She "dabbles"), how to keep one's dog from getting fat ("get them out there and throw the ball") and what's her favorite dance move ("It's obviously the Dougie").

Asked about her chance to present best picture at the Oscars last week, the first lady said the night was "absolutely nerve wracking."

"It was pretty intimidating but I got through it," she said.