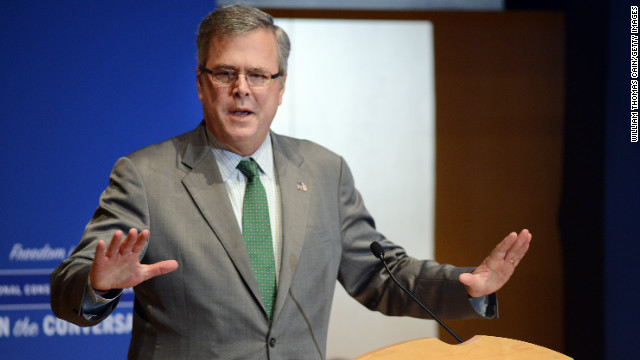 DEVELOPING: JOHN BRENNAN ONE STEP CLOSER TO LANGLEY… The Senate Intelligence Committee voted 12-3 Tuesday to send John Brennan's nomination to be the next CIA director to the full Senate. The vote was delayed twice as members received and processed classified documents relating to the White House's targeted killing program, which includes the use of unmanned drones to kill suspected terrorists. – Kevin Liptak and Ashley Killough

THE SLOW TRICKLE OF SEQUESTER EFFECTS…
FAA CLOSING CONTROL TOWERS: The federal government will close 173 air traffic control towers at small- and medium-size airports on April 7 because of forced spending cuts, the Federal Aviation Administration told tower operators Tuesday. It will close another 16 towers on Sept. 30, the end of the fiscal year. – Mike Ahlers
FIRST FURLOUGH NOTICES GO OUT: The Army sent letters on Feb. 28 and March 1 to unions warning that employees at the Aberdeen Proving Ground in Gunpowder, Md., as well as the Corps of Engineers in Walla Walla, Wash., will be forced to stay at home without pay one day each week from April 22 through Sept. 21. – Jennifer Liberto for CNN Money

TRAIL TRIVIA
(Answer below)
What president participated in "dial-a-president," where the leader fielded phone calls from everyday Americans?

For many Republicans, the race for the 2016 GOP presidential nomination begins and ends on what Jeb Bush decides to do.

The former Florida governor acknowledged it is something he is going to consider, but do not expect it to happen anytime soon. Jake Tapper, CNN’s chief Washington correspondent and anchor of the upcoming weekday program “The Lead,” asked Bush in an interview Tuesday his thoughts on following his father and brother into the White House. It is what caught our eye today.

Tapper: What kind of factors will you be weighing in the next year in making this decision?

Bush: Well I’m not going to factor anything in a year. That’s the only thing I’ve decided, which I think I have enough self restraint to be able to pull off … And the factors would be the same that anybody should think about. First, is it the right thing to do for family? Second, do I think that somehow I have a unique perspective that might be different, that the skills I have might be useful going forward in terms of leadership … And then third, is it, you know, is it practical? Is it something that I could see going forward that I could be successful if I if I set my mind to it.

Tapper: As your father once said to you, ‘What if you win?’

Bush: It’s a great question. I use it all the time when young, aspiring people come to say ‘What should I do? I’ve really thought about this.’ … You’ve got to be able to answer that effectively. … And I’m not going to be able to answer that question. You’ve got to do it in the right context. This is not that time. The world will go through a ton of iterations just this year alone. … It’s really not a relevant time to be thinking about something that’s four years out.

Tapper: But there are other Republicans who are frozen in place waiting to see what you do.

Bush: Oh, I don’t know about that. … I think people have different perspectives on this and they’ll pursue them as they see fit.

Tapper: But you’ll make a decision sometime in 2014, is that a fair assessment?

Bush: I don’t know. The only thing I’ve decided is that I’m not going to think about it for 2013. It’s just too far out for me personally. That’s not to say that others won’t have a different view. … I think that there’s a lot of talent in the Republican Party and you know we’ll see how it plays out. I do think there’s a lot of work that all of us can do to change the path that the Republican Party is on to make it less reacting to what the president is proposing and more proactive about a positive agenda to deal with structural problems that people in Washington haven’t addressed.

Bush also addressed his controversial immigration proposals in his interview with Tapper. VIDEO

Leading CNNPolitics: Spending cuts rile Christie, who blasts lack of 'leadership'
New Jersey Gov. Chris Christie wasn't kidding when he said last year that “when the president does things that deserve scorn, I'll give him scorn.” … On Monday, that criticism came during a press conference, when Christie described a lack of “real leadership” in Washington as massive forced spending cuts take effect. “Real leadership would get this fixed,” Christie said during the event. “You get everybody in the room and you fix it, and you don't let them leave until you fix it.” – Kevin Liptak

Leading Drudge: Closed!
The White House announced Tuesday that it was canceling all public tours of the president’s home because of the sequester spending cuts. “Due to staffing reductions resulting from sequestration, we regret to inform you that White House Tours will be canceled effective Saturday, March 9, 2013 until further notice. Unfortunately, we will not be able to reschedule affected tours,” the White House said in an email. – Stephen Dinan for The Washington Times

Leading HuffPo: Enough Already
President Barack Obama, unable to persuade Republicans to accept higher taxes, is attempting to cobble together what he calls a "common-sense caucus" among lawmakers to help resolve U.S. budget woes and push his legislative agenda. On Monday and in recent days, Obama has made individual phone calls to a number of senators in a search for common ground on $85 billion in budget cuts that went into effect last week, as well as his top priorities like deficit reduction, gun control and an overhaul of U.S. immigration laws. – Richard Cowan and Steve Holland for Reuters

Leading The New York Times: Obama Shares Data on Drones and Libya as Brennan Vote Nears
On the eve of Tuesday afternoon’s vote by the Senate Intelligence Committee on the confirmation of John O. Brennan as director of the Central Intelligence Agency, the White House agreed to provide more information both on the legal basis for targeted killings and on the terrorist attack in Benghazi, Libya, that killed four Americans last September. – Scott Shane

- The little boy who cried wolf -
REPUBLICAN SEN. JOHN CORNYN OF TEXAS IN A STATEMENT TO REPORTERS: “President Obama reminds me of the little boy who cried wolf. And his credibility has been strained by claims in his administration of pink slips for teachers that we find out weren’t going to issue as a result of the sequester. Cuts to the cleaning staff pay here and also furloughs at agencies that no longer exist.”

- Boehner: Spending the most serious threat to county’s future -
HOUSE SPEAKER JOHN BOEHNER IN A PRESS CONFERENCE ON CAPITOL HILL: “I think it's the biggest threat to the future of our country. That's why there's so much focus on it. That's why I'm hopeful that the President, Senate Democrats will get serious about moving a bill that solves, begins to solve our long term spending problem.”

- Carney flatly has ‘no reaction’ to expulsion of U.S. diplomat from Venezuela -
PRESS SECRETARY JAY CARNEY AT THE WHITE HOUSE BRIEFING: “I have no reaction to the charge that you just repeated. I can tell you that we continue to seek a functional and productive relationship with Venezuela and we remain open to a dialogue with Venezuela on a range of issues of mutual understanding including counter-narcotics, counter-terrorism and a commercial relationship between the two countries including energy.”

Gut Check Full Service: A senior administration tells CNN’s Elise Labott that the U.S. “denies the charge that the air attaché (or anyone else in our embassy or the US government) was plotting against the Venezuelan govt.” That said, U.S. Air Force Col David Delmonico is now en route back to the United States, Pentagon spokesman Lt. Col. Todd Breasseale told CNN’s Barbara Starr. Delmonico is the air attaché to the embassy in Caracas. Venezuela’s vice president announced that the attaché had been expelled by the government for plotting against it.

- In light of affidavit, Menendez reiterates prostitute allegations are ‘false smears’ -
DEMOCRATIC SEN. ROBERT MENENDEZ OF NEW JERSEY IN A PRESS CONFERENCE AT AIPAC: “I do know from the very beginning I have said that nameless, faceless, anonymous sources from the right wing blogs took this story which was just false smears right before an election cycle, attempted to do it then, and ultimately drove it into the mainstream press. But they were never anything other than false smears.”

Gut Check Full Service: Dominican woman says she was paid to say she had sex with U.S. senator… After asserting in a video that U.S. Sen. Robert Menendez had paid her for sex, a Dominican woman now says she was paid to make those claims and has never met the New Jersey Democrat, a court document states. According to a notarized document, Nexis de los Santos Santana said she was filmed without her knowledge when she claimed to have had sex with Menendez. “I am the person in the video, that is me, and those are my words, but this statement is not true,” Santana said. “I never agreed to be recorded.”

- Intriguing Opinion: Obama better at passing the buck than passing a budget -
NEW YORK TIMES COLUMNIST BILL KELLER: “Our feckless leaders may be incapable of passing a budget, but, boy, can they pass the buck. The White House spent last week in full campaign hysteria, blitzing online followers with the message that heartless Republicans are prepared to transform America into “Les Misérables” in order to protect “millionaires and billionaires, oil companies, vacation homes, and private jet owners.” Republicans retort that the budget-cutting Doomsday device called sequester was actually invented by the White House.”

Gregg Carlstrom (@glcarlstrom)
Nearly half a million Egyptians lost their jobs after the revolution, according to CAPMAS: http://bit.ly/15vlJBP

Jared Keller (@jaredbkeller)
How the History Channel turned 'The Bible' into a television blockbuster http://buswk.co/166nRkv

It was quintessential Carter – informal, wide-ranging and a little odd.

On this day in 1977, President Jimmy Carter joined CBS and Walter Cronkite for "dial-a-president," where people from all over America were able to call in and ask the president a question.

The questions ranged from the in-depth to the mundane, from whether the Yankees would go to Cuba again to play or whether the president would increase support for Vietnam veterans.

An example of the conversation:

Phyllis Dupere of Rehoboth, Massachusetts: I'm a recent graduate from college and I majored in science. And my question is about the space shuttle program. If you had the opportunity to go on one of the missions, would you go, and why or why not?

Carter: I'm probably too old to do that. I don't know if I could start now and train and get ready to go. When I was a younger person I was always very eager to do the most advanced and sometimes quite dangerous things. As soon as our country had the idea of having atomic power to propel submarines, I was one of the first ones to volunteer and was one of the very earliest submarine officers to go into the atomic power program.

After the event, Carter said that he enjoyed talking to the American people in that sort of informal setting and his White House indicated that they would like to do more ‘dial-a-president’ events.

"Ask President Carter," as the Carter White House called it, also turned into a bit for Saturday Night Live, with Dan Aykroyd playing the president.

Congrats to Peter Ubertaccio (@ProfessorU) for correctly answering today’s trivia question. Question for the professor: did you call in?