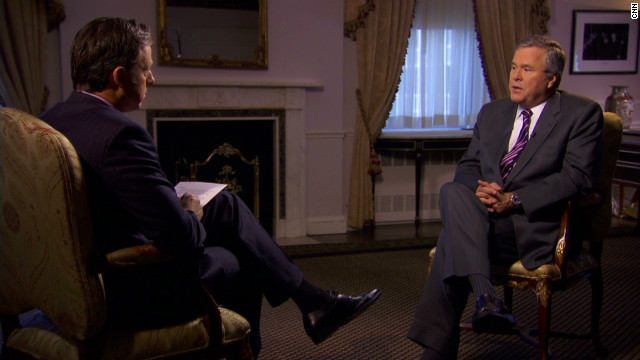 Asked by CNN Chief Washington Correspondent Jake Tapper about Rick Scott's recent decision to accept the funds, which are included as part of President Barack Obama's sweeping health care law, Bush said he had reservations about the Medicaid expansion, which will be totally funded by the federal government for the first three years. After that, federal funding will be phased down.

"The Lead with Jake Tapper" premieres Monday, March 18 only on CNN.

"I have doubts because I think if three years from now, as I understand it, three or four years from now, the deal is that the fed match goes from 95 back to what it is now, which is about 55 in Florida," Bush said.

"It's been my experience that it's been hard to tell people that once they've gotten some benefits, 'Sorry you can't have it now,'" he continued.

While Bush is correct that federal financing for Medicaid expansion phases down, the Kaiser Family Foundation indicates the federal matching level would remain at 90% for "2020 and beyond."

In his acceptance of the Medicaid expansion, Scott faced blowback from conservative Republicans who oppose Obama's health law as an overreach of the federal government. Scott was once a leading voice against the law, and campaigned heavily against it during his 2010 bid for governor.

In agreeing to the provision last month, Scott said he could not "in good conscience deny the uninsured access to care."

"We will support a three-year expansion of our Medicaid program under the new healthcare law, as long as the federal government meets their commitment to pay 100 percent of the cost during this time," he said.

The expansion faced a set back earlier this week, however, when a Florida House committee on Monday declined to produce on a bill expanding Medicaid in the state.

Republicans on the Select Committee on the Patient Protection and Affordable Care Act questioned whether the funding from the federal government would actually last for three years, given current wrangling in Washington over federal spending and the national debt. They also worried about expanding a program in Florida they characterized as broken.

Medicaid expansion in Florida isn't totally dead, however. A Florida Senate panel postponed a vote Monday on whether or not to accept the Obamacare provision, saying it needed more time to digest information that was presented by the state's economist. If the Senate panel votes it through, followed by the full Florida Senate, then it would go to the full Florida House for consideration. Republicans hold significant majorities in both chambers of the Florida legislature, making an expansion Medicaid far from certain in the state.

The Medicaid expansion program would extend medical coverage to all adults with annual incomes at or below 133% of the federal poverty level, which is currently $14,404 for an individual.