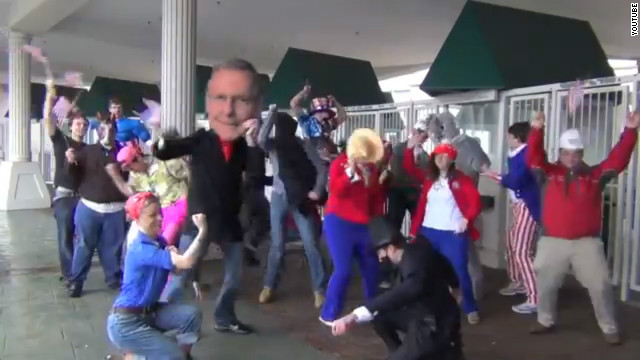 McConnell campaign shakes it up with Harlem Shake

(CNN) - The dance craze that's been sweeping the nation has made it to the campaign trail.

Senate Minority Leader Mitch McConnell's re-election team Wednesday put out a web video of a person wearing a mask of the Republican senator from Kentucky dancing to the Harlem Shake.

The dance move has been going viral online for about a month, with YouTube saying that the search level for Harlem Shake videos has been skyrocketing. The craze has even spread up in the air, with recordings of people doing the dance aboard a commercial flight and sky diving.

Now the dance has spread to the 2014 midterm elections, when McConnell, the top Republican in the Senate, will make a bid for a sixth term in the chamber.

The 49-second video starts with a person wearing a McConnell mask dancing to the Harlem Shake outside Churchill Downs, site of the Kentucky Derby, which is just a few minutes from McConnell's re-election campaign headquarters. The person is then joined by at least a dozen other people, many of whom are wearing red, white and blue garb, and even someone in what appears to be an elephant costume, also dancing the Harlem Shake.

The McConnell campaign tells CNN that the people in the video are college students from nearby schools who "approached us about shooting it because they are all fired up to volunteer for Team Mitch!"

"We are putting it out because we plan to work hard but also plan to have a lot of fun," said McConnell campaign manager Jesse Benton.

This new web entry by the McConnell campaign is vastly different in nature than their last video, which criticized activist actress Ashley Judd, the only Democrat seriously considering a challenge to McConnell next year.