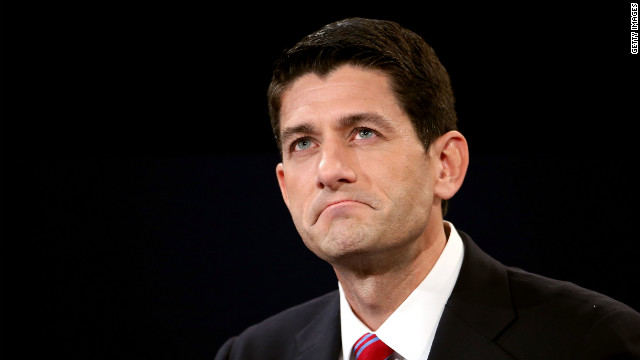 Ryan, the Budget Committee Chairman and 2012 GOP vice presidential candidate, had urged his GOP colleagues to support the entitlement reform as part of next year's GOP budget. But many House Republicans resisted, worried that the plan would be politically perilous because it would break the party's pledge not to include Americans who are now older than 55.

Ryan argued for the change because Americans are retiring later and he thought it was more "intellectually honest" to reflect that development in his plan, according to a GOP source. But House Republicans across the political spectrum worried – some openly – that moving the age from 55 to 57 would open them up to criticism that they were backtracking on a promise they had made to voters.

In a briefing for reporters Wednesday in a Budget Committee conference room on Capitol Hill, Ryan declined to answer questions about specific proposals in his budget that will be released next Tuesday. He also declined to address the concerns his colleagues have raised about his Medicare proposal.

But multiple Republican aides told CNN that he changed his mind after those internal discussions and would move forward with a Medicare proposal similar the one in his budget last year. An analysis of the approximate savings from making that Medicare change on age eligibility also showed it wouldn't save significant money.

Ryan did signal that much of what he will roll out next week reflects proposals for spending and entitlement reforms he's pressed in the past, saying, "I wouldn't expect big surprises from us next week."

It's expected that the GOP resolution will again propose overhauling Medicare in ten years by shifting it from a government-run program to one that would give seniors support to help pay for private health care coverage. It will also include more spending cuts to domestic programs and some general instructions for tax writing committees to overhaul the tax code this year.

Ryan told reporters he spoke to President Obama this week. He declined to share any details of their conversation, but railed against the president for failing to lay out his own budget by the deadline in February.

"With respect to the president I find it interesting that he's chosen to blow the deadline again – not only by a week or two, which is what we've seen in the past, but an indefinite period of time and waiting for others to lead first," Ryan said.

Showing a flash of the tough rhetoric Ryan used on the campaign trail last fall when he served as Mitt Romney's running mate, Ryan added, "The person in the White House ought to lead – that's what presidents are supposed to do and by delaying your budget for an indefinite period of time, it shows that there's just not a seriousness of purpose to actually fixing our budget problems."

As GOP leaders pledged earlier this year, the House Republican plan will balance the budget in ten years – a more aggressive goal than they included in last year's budget, which took more than 25 years to balance.

Ryan stressed that balancing the budget in ten years is not only a "necessary goal but an achievable goal" and challenged Senate Democrats to follow suit.

But the recent congressional battles over taxes and spending have actually helped make it easier for Ryan to reach that goal. After the fiscal cliff deal at the end of the year, which raised taxes on wealthier Americans, new revenue is coming into the Treasury, helping Republicans in their effort to balance the budget by 2023.

Ryan, who along with most congressional Republicans blasted the President for insisting on what they argued were tax increases as part of that deal, conceded that he's now using that revenue – hundreds of billions of dollars - to put together his budget.

"We're not going to refight that fight," he said.

In a prebuttal to the budget that Senate Democrats are preparing to put out next week Ryan told reporters to "watch the games."

He pointed to a "war gimmick" and a "Sandy gimmick" he believed Senate Democrats would use to argue they were rolling out a plan that would significantly reduce the deficit. The Congressional Budget Office assumes the costs for the war in Afghanistan, which is winding down, and the Hurricane Sandy cleanup continue for 10 years, and Ryan predicted Democrats would use those budgetary assumptions to inflate how much they're really saving.

The Wisconsin Republican also noted that he was also not counting savings from the forced spending cuts that were part of the 2011 debt deal as new savings because they are also part of current law.

But even before Ryan or his Senate Budget Committee counterpart, Sen. Patty Murray, D-Washington, formally unveil their budget blueprints next week most members on both sides of the aisle concede the two chambers will be highly unlikely to reconcile their fiscal plans this spring. Effectively budgets are political messaging documents, and much of the work will fall to tax and spending committees.

But Ryan said the fact that both chambers were giving dueling plans was a good sign.