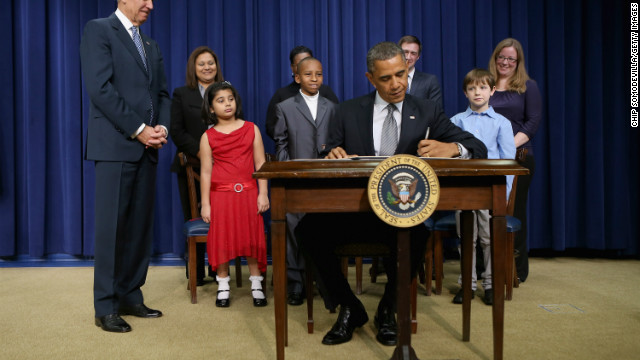 BREAKING: BRENNAN CONFIRMED AS CIA CHIEF AFTER DRONE DELAY… The U.S. Senate approved John Brennan as the next director of the Central Intelligence Agency Thursday after Sen. Rand Paul, R-Kentucky, ended his delay of the vote earlier in the day. Brennan was confirmed by a 63-34 bipartisan vote. – Kevin Liptak and Ashley Killough

#WINNING: RAND PAUL DECLARES VICTORY AFTER OBAMA ADMINISTRATION RESPONDS… Sen. Rand Paul said he was satisfied with a letter Attorney General Eric Holder sent to him on targeted killing by U.S. drones, in an interview with CNN Chief Congressional Correspondent Dana Bash. “It has come to my attention that you have now asked an additional question: ‘Does the president have the authority to use a weaponized drone to kill an American not engaged in combat on American soil?,’” the letter from Attorney General Eric Holder reads. “The answer to that question is no.” That was good enough for Paul to drop his bid to block a vote on the nomination of John Brennan as CIA director.

DRONES GO LOCAL… Detroit Free Press: Drones in the sky might have their eyes on you

GUNS: SENATE PANEL AGREES TO NEW LEGISLATION ON GUNS… A bill that would toughen laws on gun trafficking and straw purchases of firearms got the OK from the Senate Judiciary Committee Thursday to be sent on to the full chamber for consideration. … The committee also is considering other measures, including a proposal to ban semi-automatic guns that mimic military assault weapons and high capacity ammunition magazines. – Tom Cohen

MARKET WATCH: The Dow Jones industrial average has set a closing record for the third straight day, finishing at 14,329.49. Earlier in the day, the Dow also climbed to an intraday all-time high of 14,354.69.

TRAIL TRIVIA
(Answer below)
In light of Sen. Rand Paul’s spirited filibuster, who did the junior senator from Kentucky beat in the primary and general elections to win his seat?

We had to look no further than the CNN.com Opinion page (http://www.cnn.com/OPINION/) for a story that piqued our interest because it provided further insight into how President Barack Obama was going to approach his second term.

Jim Messina penned a column today where he tried to explain how the president’s campaign is going to morph from a political operation into an advocacy organization.

“You can't change Washington from the inside,” Messina wrote on cnn.com. “President Obama was criticized for stating that simple truth during the campaign, but without Americans organizing in support of the issues they believe in, lobbyists and special interests will drive the agenda in Washington.”

Messina, Obama’s campaign manager who is now national chairman of the newly formed Organizing for Action, argued that it was imperative the organization take on a new role to advocate the president’s policies.

“At this crossroads for our economy, we can't afford business as usual,” he wrote. “That's why we've formed Organizing for Action, to ensure that the voices of the majority of Americans who voted for policies that will strengthen the middle class will be heard.”

Messina also made some news by revealing that restrictions would be placed on donations and noted that contributors would be named. OFA had come under fire for a fundraising plan that included access to the president for the most generous donors.

... “[E]very donor who gives $250 or more to this organization will be disclosed on the website with the exact amount they give on a quarterly basis,” Messina wrote. “We have now decided not to accept contributions from corporations, federal lobbyists or foreign donors.”

Obama’s former campaign manager also emphasized that OFA will not work on behalf of candidates and said the “mission of this organization is to rebalance the power structure” that has been dominated by special interests.

Still, a newly restructured OFA is only going to force the president’s opponents to form their own “advocacy” groups to counter his policies. In the end, tens of millions, maybe hundreds of millions of dollars will be spent in the next four years to enact or defeat Obama’s agenda.

Leading CNNPolitics: Rand Paul scores points with father's skeptical supporters
Ron Paul supporters were never that trusting of his son, Rand Paul. But after last night's libertarian clinic, where Paul quoted libertarian thinkers, emphasized the infallibility of the Constitution and elevated the drone discussion, Ron Paul supporters have started to take notice – and may be changing their opinion of the younger Paul. – Dan Merica

Leading Drudge: Old Bulls Buck Rand Stand
Sen. Rand Paul’s filibuster didn’t thrill all of his colleagues. Almost exactly 24 hours after Mr. Paul began his information-seeking filibuster against John O. Brennan, Sens. John McCain and Lindsey Graham took to the Senate floor to denounce his demands and say he was doing a “disservice” to the debate on drones. – Stephen Dinan

Leading HuffPo: Warren'd
Sen. Elizabeth Warren (D-Mass.) took on Attorney General Eric Holder's admission that some banks are too big for the Justice Department to prosecute, asserting that Holder's statement illustrates why the financial institutions should be held accountable. – Mollie Reilly

Leading The New York Times: Charity Takes Gun Lobby Closer to Its Quarry
Despite its low profile, the Congressional Sportsmen’s Foundation has close ties to members of Congress, allowing its donors, who give as much as $100,000 a year, to mix with lawmakers at shooting contests, banquets and wine tastings. The food and drink at last month’s gathering were paid for in part by the National Rifle Association and the trade group for the gun industry. – Mike McIntire

- Obama’s dinner with Senate Republicans: Cordial, candid and constructive -
SEN. PAT TOOMEY OF PENNSYLVANIA IN AN INTERVIEW WITH CNN: “It was a candid and constructive conversation on both sides. Most of the discussion was about fiscal issues, although it did extend beyond fiscal and budgetary issues. … This was a beginning of a process and there's a lot of work left to do.”
SEN. DAN COATS OF INDIANA IN AN INTERVIEW WITH CNN: “It was a cordial dinner but it was a serious dinner. We talked about the debt and deficit and plunged into more and more debt through out of control government spending. I was glad the president took the opportunity to talk to us personally.”

- Chris Van Hollen, Paul Ryan have lunch with POTUS -
REPUBLICAN REP. PAUL RYAN OF WISCONSIN IN A WRITTEN PRESS STATEMENT: “I thank President Obama for hosting a frank discussion about Washington’s budget challenges. Everyone needs to be a part of this conversation. We need an open debate about how best to balance the budget and expand opportunity. I look forward to having that debate next week with specific budget proposals from House Republicans and Senate Democrats.”

Gut Check Full Service: Guess who was not invited to lunch or dinner? House Speaker John Boehner, according to Boehner spokesman.

- Republicans split on Paul’s filibuster, use of drones -
SEN. JOHN MCCAIN IN A SPEECH ON THE SENATE FLOOR: “I don’t think what happened yesterday was helpful to the American people. We need a discussion, as I said, about how we are going to address this new form of almost interminable warfare, which is very different than anything we have faced in the past. But to somehow allege that the United States of America, our government, would drop a drone Hellfire missile on Jane Fonda, that brings the conversation from a serious discussion about U.S. policy to the realm of the ridiculous.”
SEN. MITCH MCCONNELL IN A SPEECH ON THE SENATE FLOOR: “Yesterday, the junior senator from Kentucky took to the Senate floor to exercise his rights as an individual senator in pursuit of an answer from the attorney general concerning the rights of United States citizens. That filibuster was extended, heartfelt and important.”

- Mayors against Illegal Guns tout support for universal background checks -
MICHAEL BLOOMBERG, MAYOR OF NEW YORK AND THE GROUP’S CO-CHAIR, IN A STATEMENT: “Americans overwhelmingly support background checks to keep guns out of the hands of criminals. Now it’s time for Congress to stand with their constituents to pass a law requiring background checks for all gun sales – and to take other common sense steps that will save lives.”

Even though the political climate in 2010 favored Republicans, Sen. Rand Paul of Kentucky was far from a shoo-in for the state’s open Senate seat.

Not only did Paul have to defeat Secretary of State Trey Grayson, a candidate who was backed by Kentucky’s powerful Sen. Mitch McConnell, but he also had to beat Democratic Attorney General Jack Conway, who put up a spirited fight against Paul.

Paul’s first foray into activism – and the day that convinced him to run for Senate – was when he gave a speech on Tax Day in 2009. According to National Journal, the feel of the crowd proved to him that “something enormous was going on.”

Paul, known for his libertarian leanings, has sharply questioned the Obama administration's use of drones against American citizens overseas and championed a nearly 13-hour filibuster, that ended early on Thursday, on CIA Director nominee John Brennan.

“I rise today to begin to filibuster John Brennan's nomination for the CIA,” Paul said. “I will speak until I can no longer speak. I will speak as long as it takes.”