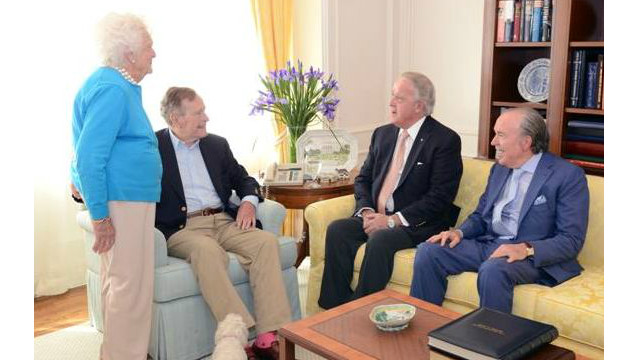 The 88-year-old Bush left a Houston hospital in mid-January after a lengthy bout with bronchitis and several complications. He had been hospitalized since November.

Last Friday the 41st President also visited the center to attend a reading of a play by former White House Press Secretary Marlin Fitzwater entitled "Empires Fall," about the end of the Cold War, and he attended a private dinner for the library.

"Since President Bush's extended stay in the hospital, this is the second time in a week that they have visited the Library Center," Fred McClure, chief operating office of the George Bush Foundation, said in a statement.

"I had been told that it wasn't like that he would stay for the entire play and that he wouldn't come to dinner. He stayed for the entire play, went to the dinner and outlasted a lot of the other guests there. He just had a wonderful time," Andrew Card, head of the presidential center, told CNN earlier this week. "Probably the most empowering thing for him was to be with the young students at the Bush school."

Card described the president's current condition as "a little weaker than what we would like" but that his "mind is strong."

"He doesn't really like to give public speeches any more. He's got a wonderful wave, a wonderful handshake, and he knows how to give you a hug that you'll carry with you for a long time," Card said.

Just this week publishers released an updated book of the president's letters and writings.

Public to get rare insight into President George HW Bush