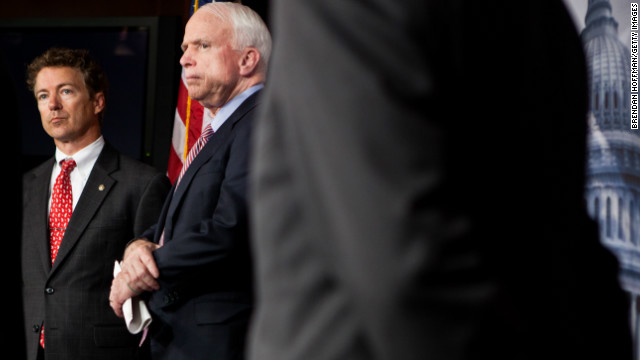 (CNN) – Disparagement from members of his own party has Sen. Rand Paul recalling the golden rule: treat others as you would like to be treated.

Responding to Sen. John McCain's condemnation of his thirteen hour filibuster, Paul said Friday that while "I treat Sen. McCain with respect, I don't know if I always get the same in return."

Paul was speaking on The Mike Huckabee radio show. Earlier in the day, McCain told The Huffington Post that Paul, along with Sen. Ted Cruz - who assisted in Wednesday's filibuster - was a "wacko bird" that could taint American's impressions of the GOP.

"I think it can be harmful if there is a belief among the American people that those people are reflective of the views of the majority of Republicans. They're not," he told the website.

That was after McCain took to the floor of the Senate to publically chastise Paul for the marathon speaking session, which held up the confirmation of John Brennan to become CIA director. Paul and his allies were seeking answers on the Obama's administration's use of unmanned drones.

"All I can say is that I don't think that what happened yesterday is helpful to the American people," the Arizona Republican said on the Senate floor. McCain, along with fellow Republican Sen. Lindsey Graham, were skeptical of Paul's claim that the Obama administration was dodging the question of whether or not Americans could be killed by drones within the United States.

The reprimands from McCain drew a perplexed reaction from Newt Gingrich, the former House speaker and 2012 GOP presidential candidate.

"I don't know what's happened to John McCain but I find it very sad," Gingrich said on CNN's "The Situation Room with Wolf Blitzer."

"I'm really disappointed in John McCain, and I'm very saddened by it," Gingrich continued. "McCain in his younger years was a great maverick. He took on his party all the time."

Paul shrugged the rebukes off Friday, saying his critics were "on the wrong side of history."

While he praised McCain for his heroism during the Vietnam War, Paul was adamant that it didn't make his colleague correct.

"He deserves respect for spending years and years in prison in the Vietnam War. But I would say that it doesn't mean that his ideas always trump everybody else's ideas," he said.