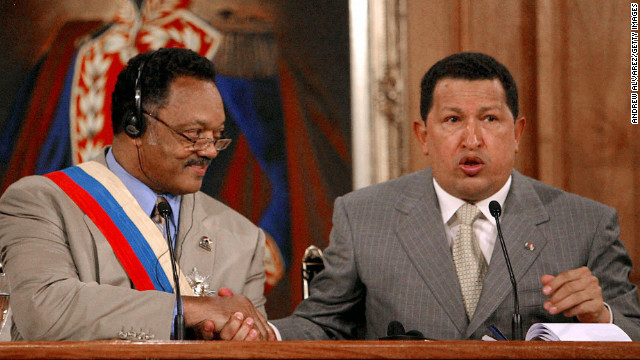 (CNN) – The civil rights leader Rev. Jesse Jackson Sr., who ran for president twice in the 1980s, traveled to Caracas Thursday to attend the funeral of Hugo Chavez, the staunchly anti-American Venezuelan leader who died earlier this week.

In an opinion article on CNN.com, Jackson explained that in the South American nation he would "meet with political, religious and community leaders" to reiterate the official message from President Barack Obama's administration that the United States hopes to foster better ties with Venezuela.

Jackson is not a member of the official U.S. delegation to Chavez's funeral, which includes the American charge d'affaires at its embassy in Caracas, James Derham. U.S. Rep. Gregory Meeks, D-New York, and former lawmaker William Delahunt of Massachusetts make up the rest of the U.S. delegation.

The United States does not currently have an ambassador in Venezuela.

In his op-ed, Jackson advocates putting an end to the "hot rhetoric, demonization and policies of isolation" that have marked U.S.-Venezuela relations in recent years.

"It's time to forge a practical, productive relationship that will lead to normalization of diplomatic relations between the U.S. and Venezuela," he wrote.

Chavez himself was also not immune from vitriolic rhetoric, famously speaking at the United Nations in 2006 referring to then-President George W. Bush as "the devil."

Jackson, who wrote in a statement on his Facebook page Friday that he was "saddened" by Chavez's passing, has a long and successful history of negotiating with foreign leaders the United States considers hostile.

In September of last year made a face-to-face appeal to Gambia's president Yahya Jammeh for the release of two American citizens serving prison sentences for treason in the African nation. That followed a 1999 negotiation with then-Yugoslavian president Slobodan Milosevic that resulted in the release of three U.S. soldiers who had been held for over a month.