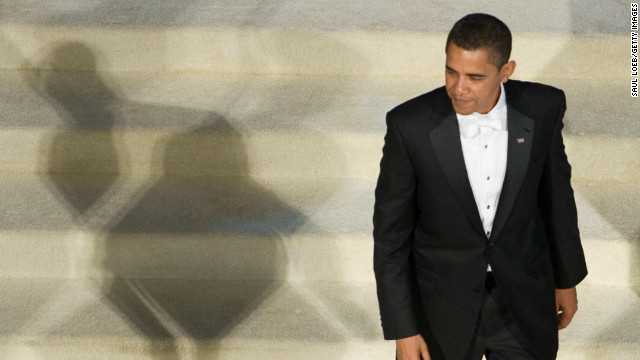 President Obama: 'My joke writers have been placed on furlough'

The annual event brings together politicians and Washington’s media elite. Because there’s limited press access, presidents who attend usually act a little looser than when the camera light is on.

This is the second time Obama has attended the dinner as president but the first since 2011.

“As you know, I last attended the Gridiron dinner two years ago. Back then, I addressed a number of topics - a dysfunctional Congress, a looming budget crisis, complaints that I don’t spend enough time with the press. It’s funny, it seems like it was just yesterday,” Obama said.

This year, the president said the jokes were a little harder to come by because of forced budget cuts and also talked of the notoriously long dinner.

“My joke writers have been placed on furlough,” Obama said. “Of course there is one thing in Washington that didn’t get cut: The length of this dinner. Yet more proof that the sequester makes no sense.”

Vice President Joe Biden wasn’t in attendance but his presence was still felt. Biden is rumored to be a potential presidential nominee in 2016 but Obama said he may have different aspirations.

“(The) vice president is still ambitious. But let's face it, his age is an issue. Just the other day, I had to take Joe aside and say, ‘Joe, you are way too young to be the pope,’” Obama said.

Obama even made light of Sen. Marco Rubio’s infamous water sip during the Republican response following the State of the Union address.

“Of course, as I begin my second term, our country is still facing enormous challenges,” the president said, taking a long sip of water. “That, Marco Rubio, is how you take a sip of water.”

The president also brought up his new Secretary of State, John Kerry, and compared him to his predecessor, the famously pantsuit-wearing Hillary Clinton.

“Let’s face it - Hillary is a tough act to follow. But John Kerry is doing great so far. He is doing everything he can to ensure continuity. Frankly, though, I think it’s time for him to stop showing up at work in pantsuits. It's a disturbing image,” Obama said.

Every president since 1885 except for Grover Cleveland has spoken at the 128-year-old organization’s dinner.

Despite being a media organization, the dinner is traditionally closed to the television press pool which typically covers the president. But a newspaper pool reporter was allowed into the dinner Saturday for the first time ever and provided updates to the media. The idea behind the limited media access is to allow both club members and politicians a chance to let their guards down and tell jokes they may not otherwise tell with cameras watching and listening.

Still, some have criticized the gathering both for the limited media access and for the perceived coziness between the press and politicians they have to report on.

Obama will be attending the larger White House Correspondents’ Dinner next month which does allow television media coverage.

The president ended tonight’s dinner on a serious note, thanking journalists for the work they do.

“In an age when all it takes to attract attention is a Twitter handle and some followers, it’s easier than ever to get it wrong. But it’s more important than ever to get it right. And I’m grateful for all the journalists who do one of the toughest jobs there is with integrity and insight and dedication and a sense of purpose that goes beyond a business model or a news cycle,” Obama said.