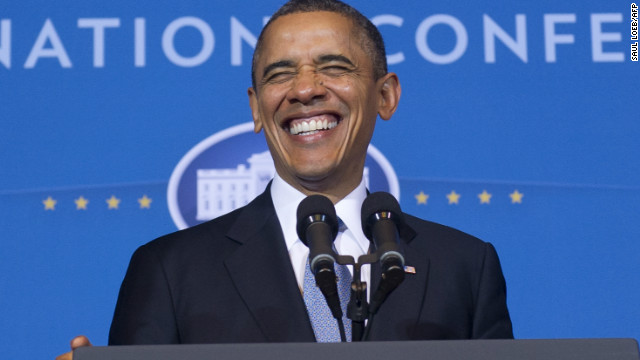 SODA BAN SETBACK: A state judge invalidated a New York City law banning certain venues from selling sugary drinks in containers larger than 16 ounces. The ban was due to take effect on Tuesday. The judgment is a setback for Mayor Michael Bloomberg, who has backed several laws aimed at improving the health of New Yorkers. – Melanie Hicken

HOW OBAMA COULD SAVE MEDICARE: The White House often says President Barack Obama has a plan for reforming entitlements, particularly Medicare. However, the specifics of that proposal don't spring to mind as easily as the reforms being bandied about in Republican circles, such as providing seniors with vouchers to pay for premiums or raising the retirement age. Here are some of the key things that Obama would do… Pay less for drugs… Reduce payments for post-hospital care… Raise premiums on the wealthy and charge new enrollees more… Reduce payments to providers for unpaid debt. - Tami Luhby for CNN Money

TRAIL TRIVIA
(Answer below)
President Franklin D. Roosevelt's first fireside chat was this week in 1933. What was the topic?

President Barack Obama has come to be known as a president who can deliver a funny line. Even his political opponents would say his comedic speeches deliver, something that caught our eye from this weekend’s speech at the Gridiron Club and Foundation dinner.

Obama is far from the first president to use humor as a rhetorical device, though.

But with the advent of television and radio, a different kind of funny is required from these serious men. And because of that, presidential staffs now include comedy writers, people paid to make the president funny.

Men and women like Mark Katz, the principal of the Soundbite Institute and President Bill Clinton’s former joke writer.

“The acid test for any joke is do you like this president for having said it,” Katz said. “And if it is presidential and it meets that threshold, then you have a good joke.”

One of the best lines Katz wrote in his eight years with Clinton was the president’s self-deprecating joke at his first White House Correspondents Dinner in 1993. After a particularly bad first 100 days, Clinton addressed his lackluster performance with a bit of jest.

“I don’t think I’m doing that bad,” Clinton said with his iconic southern drawl. “At this point in his administration, William Henry Harrison had already been dead for 68 days.”

Presidents, like everyone else, want to be funny, Katz said.

“People are naturally funny and politicians are a lot like people in many significant ways,” Katz said. “Once they hear a room full of people laugh at them, it is addicting. They want to continue to be funny.”

“Any political adviser with a half a brain realizes that humor helps a candidate connect with an audience and helps sell an idea in the sound-bite era,” said John Avlon, a CNN contributor and former speechwriter. “It helps them connect with 'the common folk' - and it’s the most durable way to explain an idea.”

As leader of the free world, though, there is a bit of danger in telling a joke - it needs to fit the person delivering it and, like most comedy, timing is everything.

“Presidents only want to come across as funny when it’s the right time, and even then it’s almost bad to be too funny,” said Pete Dominick, a CNN contributor and host of “Stand Up!” On Sirius radio. “One of the many reasons why I think being POTUS would suck.”

As for history’s funniest president:

Katz: “The line that is the Rosetta Stone of presidential humor was delivered by President John F. Kennedy.” Pretending he was reading a telegram from his father, a man who many had criticized for buying the young politicians races, Kennedy said, “Don't buy a single vote more than is necessary — I'll be damned if I'm going to pay for a landslide.”

Dominick: “When I think comedy, I don’t think of presidents or of politicians at all. I think George W. Bush was the funniest president we have ever had. Sadly he was almost never trying to be.”

Leading CNNPolitics: White House, Obama loyalists defend president's outside group
It's an organization billed as being no different than the Democratic National Committee. But its defenders say the group is seeking a bipartisan agenda, on behalf of the president. And it's going to raise a lot of money. Welcome to the gray area inhabited by President Obama's post-election political organization, Organizing for Action. Its initials OFA are, of course, intended to harken back to the name given to the president's re-election outfit, Obama for America. – Jim Acosta

Leading Drudge: Judge Slaps Down Soda Ban
A state judge on Monday stopped Mayor Michael Bloomberg's administration from banning the sale of large sugary drinks at New York City restaurants and other venues, a major defeat for a mayor who has made public-health initiatives a cornerstone of his tenure. The city is "enjoined and permanently restrained from implementing or enforcing the new regulations," wrote New York Supreme Court Judge Milton Tingling, blocking the rules one day before they would have taken effect. The city's chief counsel, Michael Cardozo, pledged to quickly appeal the ruling. – Michael Howard Saul for Wall Street Journal

Leading HuffPo: Needs Improvement
Count House Speaker John Boehner among Republicans who think their party could do a better job attracting voters. "Our principles - things like freedom and responsibility - are eternal, but we’ve got to do a better job of articulating those principles and ... translating them into common-sense solutions that will help middle-class families and small businesses," Boehner said. – Chris Gentilviso

Leading Politico: Dems' big 2014 obstacle: President Obama
President Barack Obama says he’s ready to do whatever it takes to help Democrats win the House next year — a feat that could make the difference between limping to the end of his presidency and going out with a bang. But some Democratic candidates and operatives in the districts on which control of the House will hinge said in interviews with POLITICO that the message and issues Obama has emphasized since the election are creating a difficult political headwind for them. – Alex Isenstadt

Leading The New York Times: Smaller States Find Outsize Clout Growing in Senate
The disproportionate power enjoyed in the Senate by small states is playing a growing role in the dynamic on issues as varied as gun control, immigration and campaign finance. – Adam Liptak

- WH talks tough on North Korea -
PRESS SECRETARY JAY CARNEY AT THE WHITE HOUSE PRESS BRIEFING: “We are certainly concerned by North Korea's bellicose rhetoric and the threats that they have been making follow a pattern designed to raise tension and intimidate others. The DPRK will achieve nothing by threats or provocations which will only further isolate North Korea and undermine international efforts to ensure peace and stability in northeast Asia. We continue to urge the North Korean leadership to heed President Obama's call to choice the path of peace and come into compliance with its international obligations.”

- A week before three year anniversary of Obamacare, McConnell blasts the law -
SENATE MINORITY LEADER MITCH MCCONNELL IN A SPEECH ON THE SENATE FLOOR: “This law is a disaster waiting to happen. Imagine the burden we are placing on a single mom who wants to open her own store, or the young entrepreneur who wants to sell some new idea, or the business owner we all know back home, the folks who employ so many of our constituents. Instead of encouraging them to create jobs and grown the economy we are hitting them with a brick of regulations.”

- Jindal compares himself to Obama… jokingly -
REPUBLICAN GOV. BOBBY JINDAL OF LOUISIANA IN A SPEECH TO THE GRIDIRON CLUB: “What a difference a day makes. Now some people have asked me if I intend to run for president in 2016? And the answer is that I have no plans to run. I’ve made that clear, over and over again, in Iowa, in New Hampshire and in South Carolina. There is a reason I’ve got no plans to run. I mean, come on. What chance does a skinny guy with a dark complexion and a funny name have to get elected president of the United States? The truth is I am too skinny to run. At least that’s what my friend Chris Christie keeps telling me.”

- Faith leaders: “We pray that you will vote for meaningful gun violence prevention laws” -
NEARLY 4,000 FAITH LEADERS IN AN OPEN LETTER PUBLISHED IN THE DES MOINES REGISTER: “As faith leaders, we commit ourselves to fostering a culture of peace to complement and serve as a foundation for any proposed gun legislation. The slaughter of innocence in Newtown awakened our nation to the tragedy of gun violence throughout our land and we shall neither slumber nor sleep. Rather, by tireless commitment, loving hearts and the sustaining promise of our many faiths, we believe that Newtown shall be remembered as the bridge to a new and kinder world.”

Hala Gorani (@HalaGorani)
Tit for tat: The US expels two Venezuelan diplomats in response to the expulsion of two American officials last week.

Scott P. Brown (@ScottBrownMA)
I am honored to join the law firm of Nixon Peabody @NixonPeabodyLLP. Looking forward to working with the firm and its national efforts.

David M. Drucker (@DavidMDrucker)
"I don't think there's any Bush baggage at all." -Jeb Bush on potentially running for prez in 16

Security Clearance (@natlsecuritycnn)
Top Marine tells troops to save every bullet and "get the most bang for the buck" (@KevinLiptakCNN) http://security.blogs.cnn.com/2013/03/11/cutting-costs-marines-told-save-every-round/

PCNN (@PCNN)
Ex Detroit Mayor Kwame Kilpatrick had no response outside of court after convicted of 24 of 30 counts for extortion, racketeering & others

Peter Sagal (@petersagal)
Is there anything Kwame Kilpatrick did in office that WASN'T illegal? Did he embezzle his coffee?

President Franklin Delano Roosevelt delivered 30 fireside chats throughout his presidency. In the first on March 12, 1933, Roosevelt discussed banking and the steps his administration took to save the industry during the start of the Great Depression.

"I want to talk for a few minutes with the people of the United States about banking — with the comparatively few who understand the mechanics of banking but more particularly with the overwhelming majority who use banks for the making of deposits and the drawing of checks," Roosevelt said. "First of all let me state the simple fact that when you deposit money in a bank the bank does not put the money into a safe deposit vault."

Throughout the 13-minute chat, Roosevelt discussed investing, the Federal Reserve and the crisis that faced the banking industry.

"We have provided the machinery to restore our financial system; it is up to you to support and make it work," Roosevelt concluded. "It is your problem no less than it is mine. Together we cannot fail."

For the next 11 years, Roosevelt would deliver "chats" on World War II, unemployment, the coal crises and, even, "the Fall of Rome."