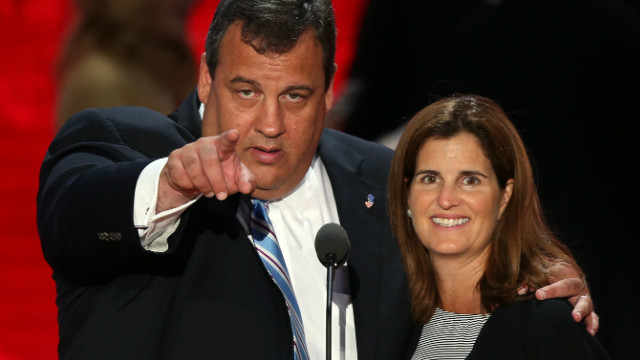 Washington (CNN) – New Jersey Gov. Chris Christie is defending his wife against criticism that the charity she helms is not distributing money fast enough to help victims still suffering after superstorm Sandy.

The governor's comments are raising eyebrows for what some see as an unfortunate irony: earlier this year Christie blasted Congress for not acting fast enough to provide relief funds for New Jersey's affected communities and businesses.

On Monday, the Republican governor addressed a weekend report in the Asbury Park Press that said out of millions of dollars raised by the Hurricane Sandy New Jersey Relief Fund, not a penny has yet helped victims over four months after the storm tore through the Garden State. The governor's wife – Mary Pat Christie – chairs the nonprofit organization.

A spokesperson for the fund told CNN it has raised $32 million. When it does disburse its funds, the money will only go to non-profit relief groups and not to individuals. The spokesperson insisted $1 million has been disbursed already, but could not vouch for whether or not the money has actually helped victims.

The governor was asked about the report during a Monday press conference in North Brunswick. His office provided CNN a transcript of the governor's remarks.

"What I can tell you is I know in broad strokes they raised somewhere between $32 and $33 million, was the number I had, was given. I know that they've approved grants for over a million dollars," Christie said.

"Whether those grants have gone out the door yet, I don't know. It seemed the story over the weekend seemed to indicate they haven't gone out the door. But I know they've been approved because Mary Pat told me they were approved." Christie added that he is "really proud" of his wife's helming the fund.

"I think she's been very clear and was very clear over the weekend that her concept of this fund from the beginning, which all the donors were told, was that this would be a long-haul organization, not one that would jump in and throw a lot of money at the problem early, but one that would be there for the next two years or so."

Mary Pat Christie is not part of the fund's panel that awards grants. But as chair of the overall group, she defended its pace of financial disbursements in an interview with the Asbury Park Press.

The wife cited groups like the American Red Cross and Robin Hood that have provided immediate relief to those hit hard in New Jersey.

"They've been out there already executing their relief strategy," the wife said. "And I think that, especially Robin Hood has been really wonderful at helping us bridge this gap."

Mary Pat Christie cited another reason for the slow pace of disbursement from her group.

"Admittedly we're learning how to do this. But I also was willing to take our time and be careful because I knew the Red Cross was there," she said.

"Non profit money is out there," she added. "I actually think that we're going to, you know, be distributing this money at a really opportune time because some of those organizations will have moved on."

"We're going to be here until, you know, the state's recovered," the wife added.

She also cited challenges of starting a charity from the ground up and designing processes to ensure no money is wasted.

Yet some feel the hurricane relief fund needs to move faster.

Comments on the group's Facebook page vary in intensity.

"Release the money…we are desperate down here for food and shelter for many!!!" wrote a poster named Cyndi Laughlin.

Frank Riehl, another frustrated poster, wrote: "Really more than half of the town of Ocean Gate was destroyed during the storm. You raised millions of dollar in relief aid for victims of the storm. But some one in one of the most heavily damaged town is not eligible for aid. Okay so what you are saying is that you have Millions of Dollars and you are NOT handing it out? Since you are NOT handing it out. What are you doing with it?"

The fund's pace of distribution is also receiving scrutiny in light of the governor previous blasting of Congress for not providing aid to affected residents fast enough.

In January, just over two months after Sandy, a frustrated Christie criticized House Speaker John Boehner and Congress for not allowing a vote on Sandy Relief. The governor also alleged a double standard: saying that much faster relief had been given to victims of Hurricane Katrina and Hurricane Andrew.

Shortly after, Congress passed a $50 billion aid package for Northeastern states hit hard by the storm.

With $1 million disbursed so far, the Hurricane Sandy New Jersey Relief Fund moves next to doling out $5 million in grants to non-profit relief groups. The fund hopes to get out that money by the end of March, the group's spokesperson said.