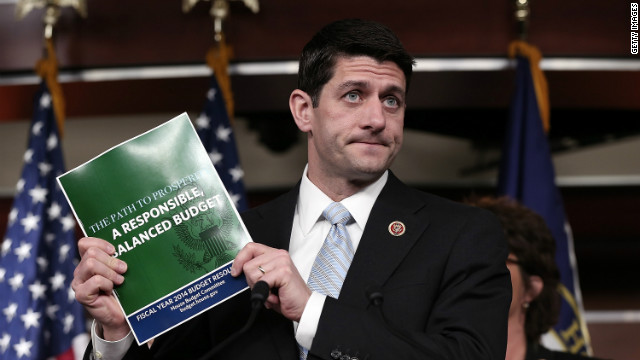 OBAMA ON THE HILL: President Barack Obama met with Senate Democrats on Tuesday afternoon and stressed the importance of compromise, according to senators in the meeting. “He says working together with the Republicans in terms of getting a grand bargain or a major dent in this issue is critically important,” Sen. Carl Levin told CNN’s Ted Barrett. “Compromise is essential, but he hasn’t seen enough from them yet. But he is also going to continue trying.” Obama’s meeting with Senate Democrats is the first of three visits to Capitol Hill this week for talks with legislators.

BLACK SMOKE RISES = NO POPE: Black smoke billowed from the chimney of the Sistine Chapel Tuesday night, indicating that cardinals gathered at the Vatican to elect a new pope had not chosen one in the first ballot of their conclave. The start of the secret election got underway earlier in the day, as the heavy wooden doors to the chapel swung closed on the 115 Roman Catholic cardinals charged with selecting the next pontiff. The next round of voting will begin Wednesday morning. … Black smoke, no pope. White smoke, success. – Laura Smith-Spark. Richard Allen Greene and Dan Rivers

TRAIL TRIVIA
(Answer below)
What is the most common presidential first name and how many men have had that name?

Republican House Budget Chairman Paul Ryan put out his 2013 budget on Tuesday, a plan that is markedly similar to the budget plan the former vice presidential candidate released last year.

The 91-page document, which outlines a plan for less spending, lower taxes and a rejection of President Barack Obama’s health care reform law, comes just a day before Democratic Senate Budget Chairman Patty Murray will release a budget proposal that many believe will contrast dramatically with the Republican plan.

Ryan’s budget plans took center stage during the 2012 campaign, when the Obama campaign used it to attack Republican presidential candidate Mitt Romney and Ryan, his running mate. Democrats say that these budget issues were litigated during the election and Obama’s re-election proves that American’s don’t approve of Ryan’s policy proposals.

“The election didn't go our way. Believe me I know what that feels like,” Ryan said at a news conference announcing his budget. “That means we surrender our principles? That means we stop believing in what we believe in?”

As it did last year, Ryan’s plan advocates the repeal of Obamacare. He knows this will be difficult, political experts told CNN’s Halimah Abdullah. “After all,” she writes, “Republicans have unsuccessfully tried to repeal Obamacare more than 30 times” – and one more if you count the Supreme Court upholding the law.

Balanced Budget: Ryan’s “plan would leave the country's accrued debt at just under 55% of gross domestic product by the end of the decade, according to Ryan's estimates. That's well below the 77% projected by the Congressional Budget Office under current law.”

Spending: Ryan estimates that his proposals will grow spending at an average rate of 3.4% a year, rather than the 5% projected. … He would cut spending in several ways. For instance, he extends the lower caps on discretionary spending set by the 2011 Budget Control Act for two more years. So instead of applying them just through 2021, as the law calls for, they would extend through 2023. As Ryan did last year, he is proposing the creation of a Medicare premium support system starting in 2024. That means those 55 and older would not be affected.

Taxes: Ryan's budget would raise the same amount of revenue as projected by the CBO. Over 10 years, revenue would total $40.241 trillion. … The Ryan budget calls on Congress to complete major tax reform by 2014.

Leading CNNPolitics: Officials investigate purported Web posting of private info on first lady, others
The Secret Service and FBI are investigating how personal information purported to relate to first lady Michelle Obama, Vice President Joe Biden and former first lady Hillary Clinton ended up on an Internet site, officials said Tuesday. It was not clear how much of the information was accurate and whether it was obtained through hacking or by scrutinizing public records. – Carol Cratty

Leading Drudge: Conclave Convenes
The 115 cardinals tasked with electing a new pope have been locked in the Sistine Chapel, marking the start of conclave in Rome on Tuesday. Monsignor Guido Marini, master of liturgical ceremonies, closed the double doors after shouting "Extra omnes," Latin for "all out," telling everyone but those taking part in the conclave to leave the frescoed hall. He then locked it.

Leading HuffPo: Frozen Over: Ryan Plan Misleads On Key Fact
The GOP House budget proposal released by Rep. Paul Ryan (R-Wis.) Tuesday included a standard Republican talking point for long-term deficit reduction: Slim down the federal workforce and pare back workers' salaries. But in making the case for a smaller, lesser-paid workforce, the proposal from the House Budget Committee chairman may mislead readers when it comes to recent federal pay. "Immune from the effects of the recession,” the budget reads, “federal employees have received regular salary bumps regardless of productivity or economic realities.” – Dave Jamieson

Leading The New York Times: Ryan Budget Plan Aims to Roll Back Obama Agenda
Four months after Republicans suffered a convincing defeat in the presidential election, Representative Paul D. Ryan of Wisconsin, the party’s vice-presidential nominee, unveiled a spending-and-tax plan on Tuesday that relies on the same lightning rod proposals of his 2012 campaign to balance the federal budget in 10 years. – Jonathan Weisman

Leading CNN’s Security Clearance: Hagel ordering review of new drone medal ranking
In an about-face, Defense Secretary Chuck Hagel has decided to review the criteria of a recently created drone award that ranked achievements in related warfare and other modern combat skills above the most noted recognition for bravery on the battlefield. Oklahoma's James Inhofe, the top Republican on the Senate Armed Services Committee, told CNN that he was informed by the Pentagon on Monday night about the decision. – Jennifer Rizzo

- With Senate and House budgets out this week, Obama’s is still forthcoming -
PRESS SECRETARY JAY CARNEY AT THE WHITE HOUSE PRESS BRIEFING: “The President will be putting forward a budget in the next several weeks. Probably the week of April 8, I would expect.”

Gut Check Full Service: Obama is tardy, says McConnell… “This is the first time in 90 years that the president's budget will actually come up after both the House and Senate have voted,” Senate Minority Leader Mitch McConnell said after a lunch with the Republican caucus. “I hope that's not a reflection of a lack of seriousness but it is beyond, beyond tardy.”

- Rush criticizes term ‘charm offensive,’ says Obama will struggle to charm anyone -
RUSH LIMBAUGH ON HIS NATIONALLY SYNDICATED RADIO SHOW: “Obama's administration, his success, it's all built on the flimsiest of things, and that is media buzz. It's all built on false images. It's all built on false stories, PR, buzz, whatever you want to say. So when the approval numbers drop, it's tough to stay on the same level. You can't revive those numbers with the unusual dose of celebrity stuff because the drop in polling data is rooted in substance. The drop in approval is rated in substance. It's rooted in the condition of the country. It's rooted in the direction the country's going.”

- NASA discovers life was once possible on Mars -
MICHAEL MEYER, LEAD SCIENTIST FOR NASA’S MARS EXPLORATION PROGRAM, AT A NEWS CONFERENCE: “Mars has written its autobiography in the rocks of Gale Crater, and we've just started deciphering that story. So chapter one: Yellow Knife Bay. This was an ancient environment with the right elements, minerals indicating a near- neutral environment and slightly salty liquid water, all the prerequisites to support life, a habitable environment.”

- Quinn distances herself from soda ban, Bloomberg’s decision -
CHRISTINE QUINN, CANDIDATE FOR MAYOR OF NEW YORK CITY, ON “PIERS MORGAN LIVE”: “Obesity is an epidemic that has enormously significant health consequences and overall, I think he's doing a really good job on that issue. That said, the soda ban isn't one of his proposals in this area that I support, because my fear is that with issues around food and obesity, if you say no, people have almost a reflex reaction to do it, to go get it.”

jimgeraghty (@jimgeraghty)
Bolling: "I just don’t find the political process to be as enjoyable as I once
did." http://bit.ly/14Sof2F