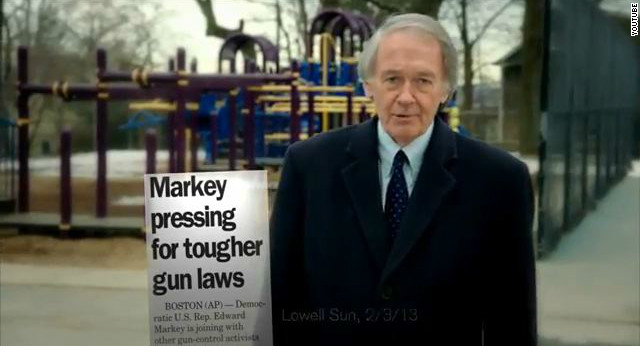 Longtime Rep. Ed Markey, considered the leading contender in the Democratic primary race, made gun control the focus of his inaugural ad, emphasizing his fight against the National Rifle Association.

The 30-second spot opened with footage of the late Charlton Heston, who once served as the group's spokesman and president.

In the ad, the narrator says the NRA has "been called the most powerful lobby in America, but that didn't stop Ed Markey."

The narrator adds that "long before tragedy swept our nation"–highlighting a newspaper article about the Newton elementary school shooting–Markey worked to fight against assault weapons coming from China.

The gun debate on Capitol Hill began to see signs of real legislation on Tuesday when a Senate Judiciary Committee voted to approve a bill calling for universal background checks. The proposal now goes to the full Senate.

Markey, who's now in his 19th term in the House, said in the ad that he'll "keep standing up to the gun lobby."

"I want these guns off our streets," he added.

His Democratic opponent, Rep. Stephen Lynch, also released an ad, one more focused on his background rather than a political issue. Lynch, a social conservative who's in his sixth term, gave a biographical look that appeared to target middle class workers.

"I grew up in public housing. Mom was a postal clerk, Dad was an iron worker. Then I became an iron worker–for 18 years," he says in the ad, looking directly into the camera.

On nights and weekend, he continued, he went to college and law school.

"In Congress, I've learned that doing what's right means knowing when to compromise and when to stand firm," he said, adding that he believes "every working family deserves someone fighting for them."

Lynch represents a large part of Boston and both congressmen represent some Boston suburbs. The two will go head to head in the Democratic primary on April 30 as they compete to fill the seat left open by John Kerry when he became secretary of state.