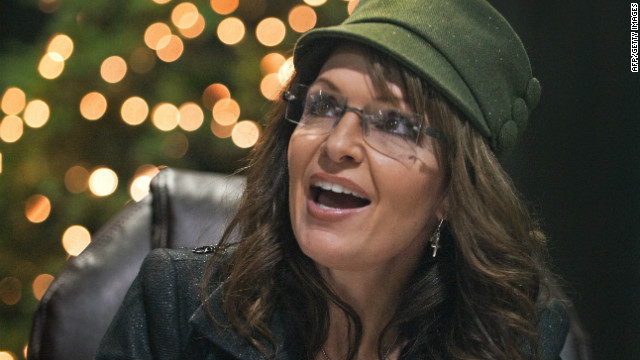 Sarah Palin is coming to town

(CNN) - Do you hear what I hear? Sarah Palin already has Christmas on her mind.

In the upcoming title, "A Happy Holiday IS a Merry Christmas," the former Alaska governor argues the holiday has become too secular because of "the politically correct elite who have hijacked the season," according to a release from the book's publisher, HarperCollins.

Scheduled for a November release, her new book will be out in time for purchase by all holiday shoppers, naughty or nice.

Her book, the publisher states, will make the argument for a more traditional Christmas that emphasizes the Christian theme behind the holiday. Palin will highlight "the importance of preserving Jesus Christ in Christmas," whether that's in public displays, school concerts or pageants. The book will also include personal memories and traditions from the most wonderful time of the year.

The 2008 vice presidential nominee has been known to defend her stance on Christmas in the past. In 2011, Palin blasted President Obama's Christmas card as "odd" on Fox News because it featured the family's dog, Bo, sitting by a fire, rather than prominently displaying values of "family, faith and freedom."

In a statement, Palin said her new book will be a "fun, festive, thought provoking" piece that will encourage readers to "unite in defense of our faith and ignore the politically correct Scrooges who would rather take Christ out of Christmas."

- CNN's Kevin Bohn and Ashley Killough contributed to this report.