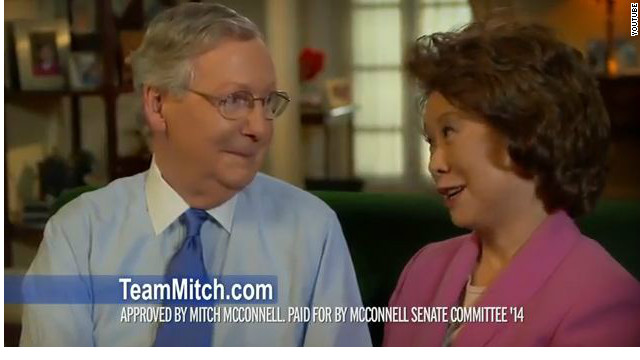 (CNN) - Former Labor Secretary Elaine Chao is using her husband Mitch McConnell's first 2014 re-election TV commercial to push back against a recent attack on her ethnicity.

In the ad, released Wednesday by the Senate minority leader's campaign, Chao looks into the camera and says "you've seen the ads attacking my husband. As Mitch McConnell's wife, I've come to expect them. Now, far left special interests are also attacking my ethnicity, even attacking Mitch's patriotism because he's married to me. That's how low some people will stoop."

Chao is referring to a controversy ignited by the liberal group Progress Kentucky, which is focused on defeating McConnell, the top Republican in the Senate who faces re-election next year back home in Kentucky. In a tweet, the group drew a connection between Chao, who's Chinese-American, and the practice of outsourcing of jobs.

"This woman has the ear of @McConnellPress – she's his #wife," read the February 14 tweet from the group, referring to McConnell by his official Twitter account. "May explain why your job moved to #China!"

After strong criticism from McConnell's campaign and even from actress and activist Ashley Judd, who is seriously considering a Democratic Senate challenge to McConnell, Kentucky Progress apologized to the senator, his wife, and the group's supporters for the tweet.

"Those tweets did not reflect our values, and we are committed to making sure nothing like that happens again," wrote Shawn Reilly, the group's executive director.

In the new commercial, Chao goes on to say that "Mitch works his heart out to protect Kentucky from Washington's bad ideas because Mitch loves Kentucky. We love Kentucky. The meanest personal attacks can never change that."

The ad, which CNN reported on Tuesday, is going up more than a year and a half before a the 2014 election, which is rare in congressional contests, especially for incumbents. When McConnell's counterpart, Reid, aired commercials around a year before his November 2010 re-election, the move made political headlines.

The Kentucky Republican's campaign says that they'll begin running the television spot starting Thursday. The campaign says they're spending six-figures to air the commercial for a week in the Louisville and Lexington markets, which cover most of Kentucky.

The Democratic Senatorial Campaign Committee was quick to respond to the new ad.

"We strongly disagree with the tweet that Mitch McConnell is referencing in his new ad, but let's be honest: Mitch McConnell is not a victim. In fact, he is the reason for Washington's dysfunction," said DSCC Communications Director Matt Canter.

McConnell, the top Republican in the Senate, is bidding next year for a sixth term in office. Chao served as labor secretary during both terms of George W. Bush's presidency.